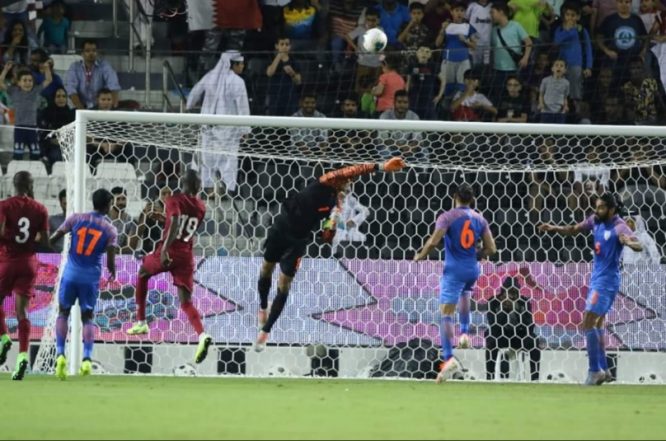 Doha, September 11: Gurpreet Singh Sandhu played the match of his life under the bar as India held Asian champions Qatar to a famous 0-0 draw to earn their first point in a Group E second-round World Cup qualifying match here on Tuesday. Sans the services of talisman Sunil Chhetri who was indisposed, Gurpreet led the Indian team who are 41 rungs below Qatar in the FIFA rankings. Qatar are ranked 62nd in the world to India's 103. Sunil Chhetri-Less Indian Football Team Script a Historic Draw Against Qatar in FIFA World Cup 2022 Asian Qualifiers; Netizens Laud Goalkeeper Gurpreet Singh Sandhu!

The Bengaluru FC custodian, who was recently awarded the Arjuna award, made a string of saves to keep the hosts at bay for the entire duration of the match. Qatar had 27 shots on target and yet failed to beat Gurpreet in India's goal as the team under Croatian coach Igor Stimac celebrated the draw like a victory at the final whistle with Spain and former FC Barcelona great Xavi Hernandez in attendance.

It was all about Qatar as far as goalscoring opportunities were concerned as Ismaeel Mohammad rattled the woodwork on the rebound in the 85th minute but luck favoured India and Gurpreet who pulled off some astonishing save either side of halftime. Sahal Samad and Udanta Singh had two gilt-edged to score for the away side in the second period but both missed by a whisker as the Indian supporters at the Jassim Bin Hamad Stadium egged the team on raucously.

India quite did not miss Chhetri upfront as all the action was in their half. Gurpreet was a rock under the bar as he made innumerable saves to keep the likes of Abdelkarim Hassan, Abdul Aziz Hatem and Almoez Ali at bay. Qatar took a dozen of shots and came close to scoring on a couple of occasions but India's skipper Gurpreet saved almost everything that came his way.

At halftime, the hosts were left high and dry as they went into the break 0-0. India, meanwhile, joined Lebanon, South Korea, Iraq, Brazil, Argentina, Paraguay and Colombia among the sides against whom Qatar have failed to score in the first half this year. India had narrowly lost to Oman 1-2 in their qualifying opener in Guwahati a few days back.