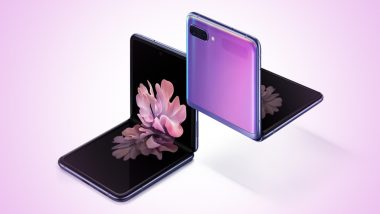 San Francisco, Feb 12: South Korean tech giant Samsung has launched its second smartphone with a foldable display dubbed as Galaxy Z Flip at the company's Unpacked 2020 event in San Francisco, California. The device has been priced at $1,380 (roughly Rs 98,400) and will be available in limited quantities in mirror purple and mirror black, starting in select markets including the US and Korea on February 14, 2020, followed by mirror gold in select countries. Samsung Galaxy S20 Series & Galaxy Buds+ Officially Launched; Galaxy S20 Ultra To Be Offered With 16GB RAM.

"At Samsung, we were encouraged by the excitement for the Galaxy Fold. Galaxy Z Flip is an important next step as we look to build the foldable category by bringing to consumers a new form factor, new display and most importantly, a new kind of mobile experience," said Dr. TM Roh, President and Head of Mobile Communications Business, Samsung Electronics said in a statement.

In terms of specifications, the device features a 6.7-inch full-HD (1080x2636 pixels, 21.9:9, 425ppi) Dynamic AMOLED Infinity Flex display as the main display. On the outside, it has a 1.1-inch Super AMOLED display with a 112x300 pixels resolution and a pixel density of 303ppi. It is powered by a 7nm octa-core processor with 8GB RAM and 256GB internal storage. Samsung Galaxy S20 Series Base Variant Could Be Reportedly Priced From $850; Expected To Sell Over 40 Million Units This Year.

In terms of optics, the phone houses a 12MP ultra-wide with f/2.2, 1.12um pixel size and 123-degree, 12MP wide-angle camera with f/1.8 aperture and 1.4um pixel size. At the front, there is a 10MP sensor with f/2.4 aperture with 1.22um pixel size and 80-degree field of view. Additionally, the device is backed by a 3300mAh battery with fast charging support via power cord and wireless PowerShare and runs Android 10.

(The above story first appeared on LatestLY on Feb 12, 2020 11:31 AM IST. For more news and updates on politics, world, sports, entertainment and lifestyle, log on to our website latestly.com).