This year has been a landmark one for mobile gaming, with more battle royale games like 'Free Fire' and 'Call of Duty: Mobile' coming to the small screen right in your palm. 'Free Fire' was the most downloaded game of 2019, according to mobile market data and analytics firm App Annie. 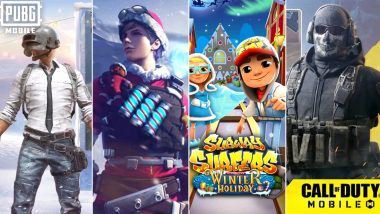 New Delhi, Dec 23: This year has been a landmark one for mobile gaming, with more battle royale games like 'Free Fire' and 'Call of Duty: Mobile' coming to the small screen right in your palm. 'Free Fire' was the most downloaded game of 2019, according to mobile market data and analytics firm App Annie. The top downloaded games of 2019 included the hyper-casual title 'Fun Race 3D', as well as 'Subway Surfers' which has also become the most downloaded game of the decade. PUBG Addiction Claims Another Life: 22-Year-Old Man Mistakenly Drinks Acid Instead of Water in Train While Engrossed in Playing Game, Dies.

"This was the year for online gaming as it saw an accelerated growth with large audience participation. The exponential rise in online gaming was all because of smartphone adoption since smartphone users reached an all-time high of 3.3 billion worldwide," said John Dong, Director, Tenda, a leading provider of networking devices.

Let us delve deeper into the top five mobile games this year.

The company also launched the lighter version of the same -- 'PUBG Mobile Lite'. It is the toned-down version of PUBG Mobile that hit the Indian market in July this year. PUBG Mobile Lite features a smaller map made for 60 players, which means faster-paced games that last 10 minutes while still keeping the traditional PUBG style of play. With an installation pack of just 400MB and built for devices having less than 2GB RAM, the lite version aims to run smoothly for all players.

Free Fire: Free Fire is the ultimate survival shooter game available on mobile. Each 10-minute game places you on a remote island where you are pitted against 49 other players, all seeking survival. Players freely choose their starting point with their parachute, and aim to stay in the safe zone for as long as possible.

Drive vehicles to explore the vast map, hide in trenches, or become invisible by proning under grass. Ambush, snipe, survive, there is only one goal: to survive and answer the call of duty.

Subway Surfers: Boasting over 2.7 billion downloads around the world, Subway Surfers was named the most downloaded mobile game of the decade by App Annie. Subway Surfers is an endless runner mobile game co-developed by Kiloo and SYBO Games, private companies based in Denmark. Subway Surfers, in which players escape a security guard, collect coins and dodge obstacles, is known for its regular updates, each one themed after a different world city. It is available on Android, iOS, Kindle, and Windows Phone platforms and uses the Unity game engine. Special events, such as the Weekly Hunt, can result in in-game rewards and characters.

Color Bump 3D: It is an arcade game with retro graphics and bright vibrant colours. The game was released in December 2018 on Android and January 2019 on iOS as well as WebGL. In this game, one needs to control the ball and try to avoid hitting any objects that are not the same colour as the ball. According to crazygames.com, the speed starts off slowly but as you progress it becomes quicker -- you must have great reactions and use swiping actions to move the ball.

The physical element of the game is interesting -- you can use the coloured objects to knock other shapes out of the way. There is a plethora of levels to play, each with a different challenge and configuration of shapes.

Fun Race 3D: Fun Race 3D is a famous APK (Android Package) game. In this game a player competes on challenging tracks with your opponents. Every level brings a new unique fun experience and it's easy to play. Race with others, achieve levels and unlock new characters.

"For 2020, online gaming we'll see some interesting technological advancements such as Virtual Reality, Augmented Reality and more in the gameplay itself. Besides this, storage for these games will be more on cloud not on any physical disks reducing their reliance on physical devices," said Dong.

(The above story first appeared on LatestLY on Dec 23, 2019 01:14 PM IST. For more news and updates on politics, world, sports, entertainment and lifestyle, log on to our website latestly.com).