The banners, with text in Urdu, called Sadiq a "gaddar-e-watan (traitor of the nation). Some of the posters, which included the images of Sadiq with Modi and Abhinandan, described him as "Mir Jafar" and "Mir Sadiq" - the two infamous historical figures who had betrayed Sultan Siraj-ud-Daulah and Tipu Sultan in medieval India. 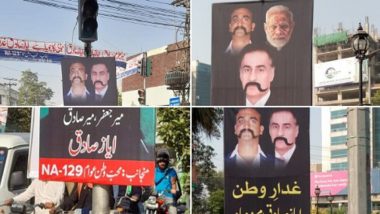 New Delhi, October 31: Posters of Indian Prime Minister Narendra Modi and IAF Wing Commander Abhinandan Varthaman were seen in Lahore as chorus grew in Pakistan for sedition charges against PML-N lawmaker Ayaz Sadiq. The banners, which were put up in several parts of the Punjab provincial capital, showed Sadiq's image along with PM Modi and Abhinandan. 'Bajwa's Legs Shook After Qureshi Said India Will Attack if Wing Commander Not Released'

The banners, with text in Urdu, called Sadiq a "gaddar-e-watan (traitor of the nation). Some of the posters, which included the images of Sadiq with Modi and Abhinandan, described him as "Mir Jafar" and "Mir Sadiq" - the two infamous historical figures who had betrayed Sultan Siraj-ud-Daulah and Tipu Sultan in medieval India.

Posters of Modi, Abhinandan in Lahore

Photograph of Indian Air Force Officer Wing Commander Abhinandan along with PM @narendramodi come up across Lahore in Pakistan. Radical groups upset with Ayaz Sadiq have put up these posters. No posters of Shah Mahmood Qureshi or Bajwa for betraying Pakistan fearing India? pic.twitter.com/gnlpcjHi1o

Sadiq came under fire after he claimed that the Imran Khan government, during an all-party meeting following the February 27 aerial dogfight with India, expressed fear of an overnight Indian attack if Wg Cdr Abhinandan was not handed over to New Delhi at the earliest.

"I remember Shah Mehmood Qureshi was in the meeting in which Imran Khan had refused to attend and Chief of Army Staff General Bajwa came into the room, his legs were shaking and he was perspiring. Foreign Minister said for God's sake let Abhinandan go, India's about to attack Pakistan at 9 PM", news agency ANI had reported Sadiq as saying in the Pakistan National Assembly earlier this week.

Most of the Urdu banners, which emerged in Lahore on Saturday, read "Mir Jafar, Mir Sadiq, Ayaz Sadiq", as they also displayed the name of his legislative constituency - NA 129. The posters were propped up a couple of days after the Pakistani Interior Ministry received proposals seeking the initiation of sedition trials against Sadiq for his remark.

Imran Khan's PTI Blamed for Putting up The Banners

Shame on PTI Lahore and whoever is behind this vile attempt. pic.twitter.com/2na65Is4JK

Sadiq, who earlier served as the Speaker of Pakistan National Assembly, is a member of former PM Nawaz Sharif's PML-N. His remarks that have triggered a row comes amid the Opposition joining hands to take on the military establishment which it has accused of "engineering" Imran Khan's victory in the 2018 elections.

On Friday, Sadiq defended his remarks, claiming that he was not questioning the valour of security forces, but the leadership of Pakistan who was allegedly afraid of India on the night of February 27. "I have never made irresponsible statements in my life," he said, adding that his remarks were "misinterpreted" by Indian media to mock Pakistan.

(The above story first appeared on LatestLY on Oct 31, 2020 11:03 PM IST. For more news and updates on politics, world, sports, entertainment and lifestyle, log on to our website latestly.com).