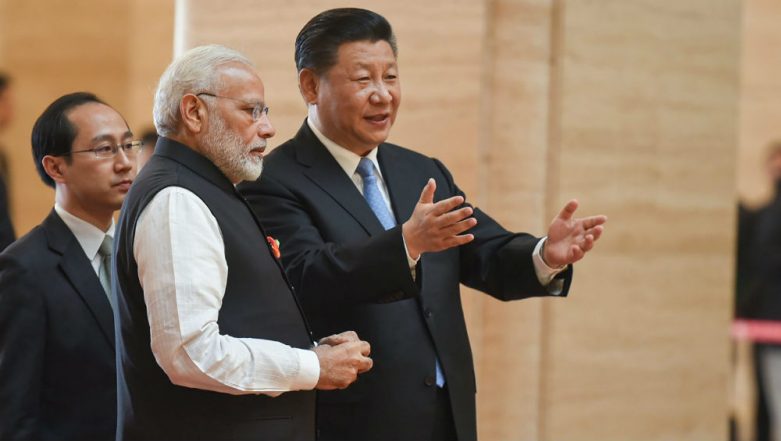 Bishkek/Beijing, June 14: Chinese President Xi Jinping said on Friday that Beijing was for the improvement in ties between New Delhi and Islamabad but at the same time pushed for the expansion of the controversial China-Pakistan Economic Corridor(CPEC), a multi-billion dollar connectivity project that has caused tensions among the three Asian nations. Chinese President Xi Jinping Awarded Kyrgyzstan’s Highest Honour Manas Order of the First Degree.

On the margins of the Shanghai Cooperation Organisation (SCO) Summit in Bishkek, Kyrgyzstan, Xi met Pakistan Prime Minister Imran Khan and told him "China supports India and Pakistan to improve relations" that nosedived after 40 CRPF troopers were killed in a terror attack by Pakistan-based terror outfit Jaish-e-Mohammed in Jammu and Kashmir's Pulwama district on February 14.

"We support Pakistan in carrying out the national anti-terrorism action plan and will help Pakistan strengthen its counter-terrorism capacity building. China supports Pakistan and India to improve relations," Xi was quoted as saying by a statement released by the Chinese Foreign Ministry in Beijing.

At the same summit, Prime Minister Narendra Modi raked up the issue of terrorism and slammed Pakistan in an oblique reference. Xi also stressed on the need to expand the CPEC, the crown jewel of China's ambitious Belt and Road project. India has sternly opposed the corridor project that plans to connect China's Kashgar with Pakistan' Gwadar through the disputed Kashmir region.

"We must expand and enrich the construction of the China-Pakistan Economic Corridor with new focus on industrial parks, agriculture and people's livelihood," Xi was quoted as saying by the statement. China, India Should Not Pose Threat To Each Other, Says Chinese President Xi Jinping On Sidelines of SCO Summit.

"It is necessary to seize the opportunity of the escalation of the China-Pakistan Free Trade Agreement and vigorously expand bilateral trade. China is willing to provide assistance to Pakistan within its ability," Xi said.

China is Pakistan's close ally and refuses to chide the South Asian nation for harbouring anti-India terrorists. Beijing has also invested billions of dollars in CPEC Pakistan that has come under attack for alleged corruption. The Chinese engineers working on the project have been attacked by militants who are against it.

During his meeting with Xi, Khan said: "The Pakistani side will firmly promote the construction of the China-Pakistan Economic Corridor and will take effective measures to provide security. Narendra Modi Holds No Meeting With Pakistan PM Imran Khan at SCO Summit; No Pleasantries Exchanged: Report.

"China is an all-weather strategic partner of Pakistan. The Pakistani side thanks the Chinese side for its valuable support and assistance for a long time. It highly values China's positive role in promoting international and regional peace and security and is committed to continuously deepening its strategic relationship with China."