Former Maharashtra Home Minister Anil Deshmukh on Monday expressed shock and concern over the timing of the issuance of summons by the Enforcement Directorate (ED) to him and his son Hrishikesh Deshmukh in connection with a money laundering case and accused the ED of "brute abuse of power and authority" in conducting a fair investigation. 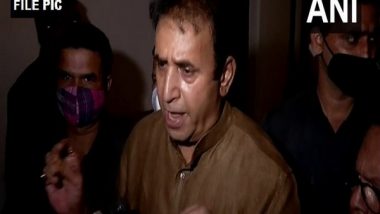 Mumbai (Maharashtra) [India], August 2 (ANI): Former Maharashtra Home Minister Anil Deshmukh on Monday expressed shock and concern over the timing of the issuance of summons by the Enforcement Directorate (ED) to him and his son Hrishikesh Deshmukh in connection with a money laundering case and accused the ED of "brute abuse of power and authority" in conducting a fair investigation.

Deshmukh wrote to ED that he will be appearing after directions from the Supreme Court and today he is sending his lawyer for representation before the ED.

In his letter written to the ED, Deshmukh said, "With regard to the subject summons, at the outset, I may express my grave dismay, shock and concern especially with the timing of the issuance thereof. As you are well aware as a contesting respondent that the entire investigations being carried out by your office has been challenged by me before the Hon'ble Supreme Court, wherein, I am also seeking interim reliefs.

"The said Writ Petition had come up for hearing on 30.7.2021 (the same day on which subject summons have been issued) when the Hon'ble Supreme Court has been pleased to post the matter for 3.8.2021 for considering the grant or otherwise thereof," it further read.

Deshmukh mentioned that in the writ petition, he vehemently urged that "the very commencement and continuation of the investigations by the ED are not only actuated with malice both in law as well as fact, but also the same stand vitiated on account of grave violation of the procedure established by law".

"In such circumstances, your subject summons issued soon after the date of hearing of the matter by the Hon'ble Supreme Court and seeking my personal appearance on a day prior to the next hearing before the Hon'ble Supreme Court substantially strengthens my fear and apprehension that investigations being carried out by you are neither fair nor just, impartial or above-board. Brute abuse of power and authority is apparent on the face of the record," said Deshmukh in his letter.

He further said, "I shall abide by the orders of the Courts of law and would submit myself to any appropriate direction or order that may be passed by the Hon'ble Courts in due course of law. I am more than eager to associate with the purported enquiry/investigations being carried out by your office so as to lay bare the hollowness, falsity and lack of substance therein."

"I shall humbly beseech your good self as well as carry a legitimate expectation in my mind that you shall maintain the highest standards of transparency and objectivity as are expected from a premier investigating agency of your stature. I am sending the instant representation inter alia, through my representative Sh. Inderpal B. Singh Advocate," added Deshmukh.

This is the fourth summons issued by the ED to Deshmukh as he had skipped the previous three. His son and wife too did not appear while they were also summoned by the ED.

Deshmukh is being probed by the Enforcement Directorate (ED) in a case of alleged extortion from orchestra bars in the state. ED had issued summons to the 71-year-old NCP leader and his son Hrishikesh Deshmukh seeking their appearance.The ED has alleged that Rs 4.7 crores collected from orchestra bars by dismissed cop Sachin Waze, allegedly on Deshmukh's instructions, was transferred to the former minister's Nagpur- based educational trust by his son, who routed it via two hawala operators and showed it as a donation.

Deshmukh is the president of the trust and his two sons, Salil and Hrishikesh, are its trustees.

Earlier on June 25, the ED had raided Deshmukh's residences in Nagpur and Mumbai. Raids were conducted at five places.

After the raids, Deshmukh had said that former Mumbai police commissioner Param Bir Singh had made false allegations against him after he was removed from the post over his suspicious role. (ANI)