Self-styled godman Daati Maharaj on Wednesday was granted bail after he was arrested earlier in connection with the opening of Shani Dham temple in Mehrauli here amid lockdown. 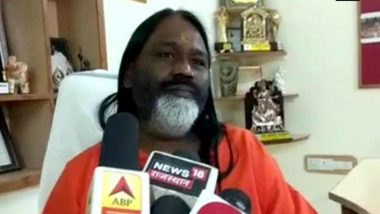 New Delhi, May 28: Self-styled godman Daati Maharaj on Wednesday was granted bail after he was arrested earlier in connection with the opening of Shani Dham temple in Mehrauli here amid lockdown.

Daati Maharaj was arrested on Wednesday under Sections 188 and 34 of the Indian Penal Code (IPC), 54B of District Disaster Management Authority (DDMA) Act and Section 3 of the Epidemic Diseases Act, said Atul Thakur, DCP (South Delhi). Lockdown 5.0 Details Announced by MHA? Report Claiming to Have Details of Fifth Phase of Lockdown Fact-Checked by MHA.

According to the police, a preliminary enquiry has revealed that Daati Maharaj, along with some others, had performed a ceremony at the temple at around 7:30 pm on May 22, flouting social distancing norms issued during the lockdown.

It had come to notice that some photographs of a ceremony at Shani Dham temple were being circulated on social media, wherein the social distancing norms were not being followed and a religious congregation was organised in contravention of the lockdown guidelines, Thakur had earlier said.

On May 23, a case was registered at Police Station Maidan Garhi in the matter.

This comes as public gatherings at religious places have been barred across the country due to the lockdown, which has been enforced since March 25 to prevent the spread of coronavirus. Daati Maharaj is also accused of raping a woman devotee in Shani Dham a few years ago.