India News | Mercury Falls in Kedarnath Due to Snowfall

Get latest articles and stories on India at LatestLY. The temperature in Kedarnath dropped on Monday due to snowfall, said the authorities. 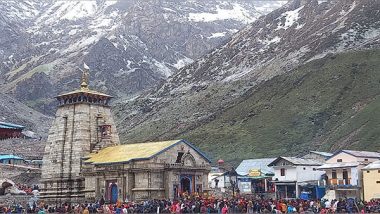 Dehradun (Uttarakhand) [India], May 23 (ANI): The temperature in Kedarnath dropped on Monday due to snowfall, said the authorities.

There was extreme cold in the area. The snowfall had started last evening and people were seen taking refuge under umbrellas.

Reportedly, the hills around Baba Kedarnath temple looked white and unstained due to snowfall. Despite the bitter cold, a large number of pilgrims were present for darshan on Monday.

The Chardham yatra began with the opening of Gangotri and Yamunotri portals for devotees on May 3, on the occasion of Akshay Tritiya in the presence of Chief Minister Pushkar Singh Dhami. While Kedarnath re-opened on May 6, the doors of Badrinath opened on May 8. (ANI)