Uttarakhand Chief Minister Tirath Singh Rawat called on Prime Minister Narendra Modi on Monday here and apprised him of the COVID-19 situation in the state and the steps being taken by the state government to contain the spread of infection. 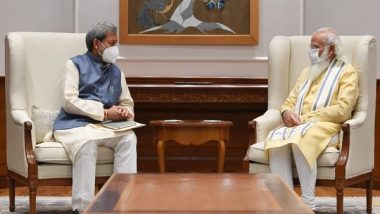 New Delhi [India], June 8 (ANI): Uttarakhand Chief Minister Tirath Singh Rawat called on Prime Minister Narendra Modi on Monday here and apprised him of the COVID-19 situation in the state and the steps being taken by the state government to contain the spread of infection.

In the meeting that lasted for half an hour, stating that Uttarakhand is a Himalayan hill state, the Chief Minister requested a special grant from the Government of India to develop it as a completely organic state.

He said that the environment of Uttarakhand is very sensitive, so a 'Glacial and Water Resources Research Center' should be established in Uttarakhand to study the glaciers in the entire Himalayan region and ways to protect the water sources.

Rawat also demanded an additional quota for timely delivery of vaccines in rural areas in case of road closure during monsoon and calamity in the state.

Expressing gratitude to the Government of India for sanctioning three Doppler radars, he requested to provide 10 small Doppler radars for the valley. The Chief Minister also requested the Prime Minister to establish a branch of AIIMS in Rishikesh.

The Chief Minister said that under the unprecedented vision of the Prime Minister, the work of roads in the Char Dhams of the state is going on at a fast pace.

Rawat said that the State has received all kinds of assistance from the Government of India to fight against COVID-19. As part of this, hospitals have been built by DRDO in Rishikesh and Haldwani respectively.

The Chief Minister said that it is the result of the visionary thinking of the Prime Minister that led to the development of Kedarnath Dham, adding that an outline is also being prepared to develop the Badrinath Dham.

"Today during my meeting with Honorable Prime Minister Shri @narendramodi ji, I have also invited him to visit the holy Char Dham by visiting Devbhoomi Uttarakhand at the appropriate time after the situation of COVID epidemic gets better," he tweeted. (ANI)