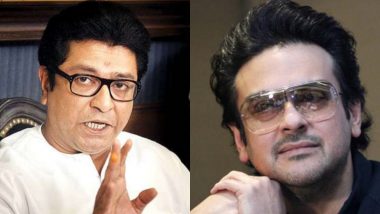 Mumbai, January 25: The Raj Thackeray-led Maharashtra Navnirman Sena on Saturday objected to the Centre bestowing the Padma Shri on singer-musician Adnan Sami, claiming he was not an "original Indian citizen".

Sami was one of the 118 people whose names were announced on Saturday for the Padma Shri awards, with the Ministry of Home Affairs list showing his home state as Maharashtra.

Sami was granted Indian citizenship with effect from January 1, 2016 after his Pakistani passport expired on May 26, 2015 and was not renewed there.

Sami, born in Lahore in Pakistan, first arrived in India on a one-year visitor's visa on March 13, 2001. He was granted Indian citizenship after he requested the Centre to legalise his status on humanitarian grounds. Padma Awards 2020: Kangana Ranaut, Ekta Kapoor, Adnan Sami and Karan Johar Conferred Padma Shri.

In a tweet late Saturday evening, Amey Khopkar, president of the MNS's cinema wing, said, "Sami is not an original Indian citizen. MNS is of the view that he should not be given any award. We condemn the decision to honour him with padmashri and demand the the decision be withdrawn."

Incidentally, during a party convention in Goregaon in the metropolis on January 23, Thackeray had dropped hints that he was planning to take up the cause of Hindutva to expand MNS' base after a series of electoral setbacks since 2014.