The winner of the tie will go on to face either Real Madrid or Liverpool in the semifinals. 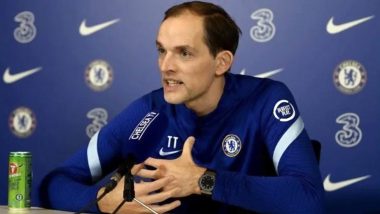 London, April 13: Chelsea manager Thomas Tuchel has said that the club has the history and culture to win titles again and again. Chelsea has not lifted a trophy since their 2019 Europa League success under Maurizio Sarri. The side remains in contention for the Champions League and FA Cup this season.

The Blues will look to seal a place in the last four of the Champions League on Tuesday when they face Porto in the second leg of their quarter-final. "We are in the second leg of the quarter-final of the Champions League, you will not find any team who does not have the goal to reach the semi-final. We are in the semi-final of the FA Cup and have the chance to arrive in the final, if we arrive in the final then we have the chance to win. There is nothing to hide. This is a club that has a culture, a structure, to win titles and win games consecutively. Chelsea is the club that has the culture and the history and mentality to do so," Goal.com quoted Tuchel as saying.

"I am here to win titles, I am here to win games and as a result, win titles. This is what I demand of myself so why should we now say anything different? If you want to win in five years or three years, I don't know what that is," he added.

Further talking about the upcoming match against Porto, Tuchel said: "Now is the time but honestly we can talk for hours and hours but tomorrow is the game to play and there is no tougher match than the next game, there is no tougher obstacle than the one in front of you and we should not get lost in dreams, hopes, and speeches or whatever."

"We are here to perform in the second leg of the quarter-final, this is what we do, and then hopefully after tomorrow we can talk about a semi-final," he added. Ramadan Mubarak: Mohamed Salah, Sadio Mane, Mesut Ozil & Others Post Wishes for Fans.

Tuchel's team has a 2-0 advantage from the first leg of their tie against Porto and this makes them favourites to reach the next round. The winner of the tie will go on to face either Real Madrid or Liverpool in the semifinals.