Get latest articles and stories on World at LatestLY. Chinese President Xi Jinping's campaign against religious symbols, practitioners and language in Tibet reflects the emergence of a "communist Taliban" in today's China, says analyst Vijay Kranti who has referenced the recent demolition of Buddha statues in Sichuan province to the 2001 destruction of historic statues in Afghanistan's Bamiyan. 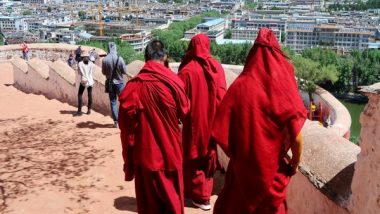 Lhasa [Tibet], January 22 (ANI): Chinese President Xi Jinping's campaign against religious symbols, practitioners and language in Tibet reflects the emergence of a "communist Taliban" in today's China, says analyst Vijay Kranti who has referenced the recent demolition of Buddha statues in Sichuan province to the 2001 destruction of historic statues in Afghanistan's Bamiyan.

In 2001 the Taliban rulers of Afghanistan had demolished two historic and giant 15th-century statues of Lord Buddha in Bamiyan that invited shock and condemnation from across the world.

In an article, Kranti noted that Chinese authorities in Tibet are demonstrating the very same Taliban spirit as the idea of President Xi Jinping to enforce "Tibetan Buddhism with Chinese socialist character is gaining momentum inside Tibet.

He said that during the past one month, all schools, established by local Tibetan communities and monasteries were pulled down and closed in one stroke of government orders.

"These make-shift schools were being run to impart Tibetan language teaching to Tibetan children after regular school hours. Under Beijing's orders, all Tibetan students are now obliged to study through Chinese Mandarin as the sole medium of teaching," writes Kranti.

According to the article, in mid-December of 2021, heavy military deployment was undertaken in Drago, a Tibetan majority county of Sichuan, where local Chinese authorities initiated the demolition of a 99-feet high Buddha statue and 45 big prayer wheels. The statue of Shakya Muni Buddha and the colourful prayer wheels were built by local Tibetan community in October 2015 at a cost of about 40 million Yuans.

About three weeks later on January 6 this year, yet another similar statue was also demolished by the Chinese authorities, Vijay Kranti said.

Reports about the arrest of dozens of monks and lay Tibetans who opposed this destruction are regularly pouring out of Tibet.

Citing Tibet Watch, a Dharamshala based human rights group, the columnist said that both of these Drago statue projects were executed by the Tibetan community after taking formal approval of local Chinese authorities. However, following President Xi Jinping's dramatic visit to Tibet in July last year and his call to the administrators and party cadres in Tibet to establish 'Tibetan Buddhism with Chinese socialist character' authorities declared that the height of the statues was beyond acceptable limits. They also cancelled earlier permissions for the construction and ordered its demolition. (ANI)