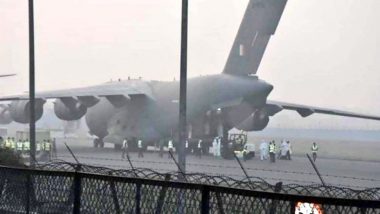 Earlier, the Ministry of External Affairs informed that the Indian Ambassador in Kabul and his Indian staff will move to India immediately, in view of prevailing circumstances in the war-torn country.

"In view of the prevailing circumstances, it has been decided that our Ambassador in Kabul and his Indian staff will move to India immediately," MEA spokesperson Arindam Bagchi said in a Tweet.

India is closely monitoring the fast-changing situation in Afghanistan and will be deciding on the evacuation of diplomatic personnel from Kabul, sources said.

Afghanistan government collapsed on Sunday with President Ashraf Ghani leaving the country and the Taliban's entry into the capital, the New York Times reported.

Earlier the same day, an Air India flight AI244 carried 129 passengers has arrived in Delhi from Kabul. They expressed concerns about the safety and security of people back home, saying the situation is 'really bad' in the country.

Panic gripped the Afghan capital as people fear about a return to the Taliban's brutal rule and the threat of reprisal killings.

Thousands of Afghans flooded the tarmac on Monday morning, at one point swarming around a departing US military plane as it taxied down the runway.