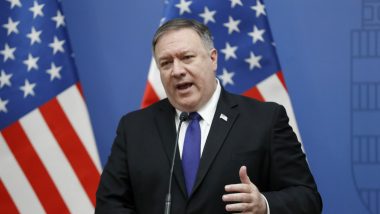 In a press statement, Pompeo said: "Taiwan is a vibrant democracy and reliable partner of the United States, and yet for several decades the State Department has created complex internal restrictions to regulate our diplomats, service members, and other officials' interactions with their Taiwanese counterparts. The United States government took these actions unilaterally, in an attempt to appease the Communist regime in Beijing. No more. Today I am announcing that I am lifting all of these self-imposed restrictions."

He said that the executive branch agencies should consider all "contact guidelines" regarding relations with Taiwan previously issued by the Department of State under authorities delegated to the Secretary of State to be null and void.

The Secretary of State further added that any and all sections of the Foreign Affairs Manual or Foreign Affairs Handbook, which convey authorities or otherwise purport to regulate executive branch engagement with Taiwan via any entity other than the American Institute in Taiwan (AIT), are also voided.

"The United States government maintains relationships with unofficial partners around the world, and Taiwan is no exception. Our two democracies share common values of individual freedom, the rule of law, and respect for human dignity. Today's statement recognizes that the US-Taiwan relationship need not, and should not, be shackled by self-imposed restrictions of our permanent bureaucracy," he said.

Comments
Tags:
Michael Pompeo Taiwan United States US US Secretary of State USA
Comments
You might also like