Several Chinese property developers have said they would accept produce, including peaches, watermelons and garlic, as down payments on new homes as they attempt to attract buyers. 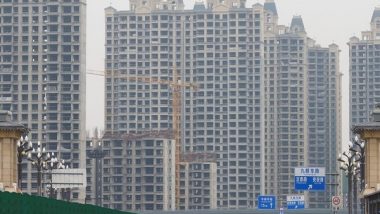 Beijing, July 5: Several Chinese property developers have said they would accept produce, including peaches, watermelons and garlic, as down payments on new homes as they attempt to attract buyers.

However, some of these unusual offers have now reportedly been pulled, the BBC reported. Chinese Tech Firms Pledge To Ban NFTs, Cryptocurrency Marketplaces

Home sales in China have fallen for 11 months in a row, while this week a major developer defaulted on its debts.

Last week, a property company in the eastern city of Wuxi said it would allow peaches be used to offset as much as 188,888 Chinese yuan ($28,218) in down payments.

Another developer in nearby Nanjing said it would accept as much as 5,000 kg of watermelon from farmers.

It valued the produce at 100,000 Chinese yuan, several times what it would cost at local markets, the BBC reported.

However, the promotion that was meant to run until next Friday has been suspended, the state-run Global Times newspaper reported.

"We were told to delete all promotional posters on the social media platforms," the paper quoted a representative of the company as saying, without giving further details.

In May, property firm Central China Management ran a 16-day campaign in which it accepted garlic as down payments for homes in Qi county, a major garlic-producing region.

"We are helping farmers with love, and making it easier for them to buy homes," the firm said in a WeChat post.

Under the deal, one catty of garlic, which is equivalent to around 600 grams, was valued at five Chinese yuan, which is around three times its market price, the BBC reported.

The company said it had accepted 860,000 catties of garlic in deals involving 30 homes.

(The above story first appeared on LatestLY on Jul 05, 2022 01:18 PM IST. For more news and updates on politics, world, sports, entertainment and lifestyle, log on to our website latestly.com).