Breaking his silence over the current global meltdown, Tesla CEO Elon Musk on Friday said the recession the world is now experiencing owing to multiple macro-economic factors could last up to 18 months. 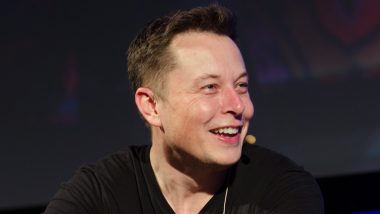 New Delhi, May 27: Breaking his silence over the current global meltdown, Tesla CEO Elon Musk on Friday said the recession the world is now experiencing owing to multiple macro-economic factors could last up to 18 months.

"Based on past experience, about 12 to 18 months," Musk replied to a follower who asked him about how long he thinks this recession will last.  Twitter Shareholder Sues Tesla CEO Elon Musk for Manipulating Twitter Stock for Personal Gains

"Companies that are inherently negative cash flow (i.e. value destroyers) need to die, so that they stop consuming resources," he added.

World Bank chief David Malpass warned this week that Russia's ongoing invasion of Ukraine could cause a global recession as the price of food, energy and fertiliser jump.

"As we look at the global GDP, it's hard right now to see how we avoid a recession... The idea of energy prices doubling is enough to trigger a recession by itself," he was quoted as saying in media reports.

Last month, the World Bank cut its global economic growth forecast for this year by almost a full percentage point, to 3.2 per cent.

Developing countries are also being affected by shortages of fertiliser, food and energy.

China has been hit harder by the latest round of lockdowns. The COVID-19 measures have led to a sharp slowdown in economic activity across the country.

The US could also hit a recession before the end of this year or by early 2023, according to the chief investment officer of Hayman Capital.

In India, foreign portfolio investors have pulled out around Rs 2.5 lakh crore from the Indian equity market.

The Russia-Ukraine war, high inflation, COVID-19 lockdowns in China and rising interest rates are the reasons behind the economic activities being hampered across the globe.

(The above story first appeared on LatestLY on May 27, 2022 11:10 AM IST. For more news and updates on politics, world, sports, entertainment and lifestyle, log on to our website latestly.com).