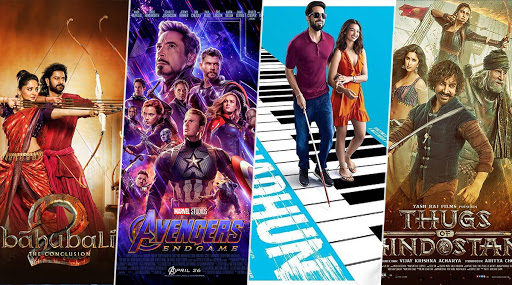 With 2019 coming to a close, another decade is over and in the past ten years, Bollywood has evolved quite a bit.  There are a few things we wished didn't exist by the time the decade ended, but they are going strong, say for example Bigg Boss or the Housefull series. Well, can't do anything about that, can we? Anyway, moving on, today we will discuss the trends that changed Bollywood for better or worse in the last decade. Year Ender 2019: From Alia Bhatt to Ajay Devgn – Here’s a List of Bollywood Celebs Who Will Play Key Roles in Upcoming South Movies

We have seen a lot of changes in the way movies are made, perceived and watched at the theatres since 2010. That year was Ranveer Singh's debut year and today, he is in a position to give you a Rs 300 crore film, which wasn't considered a possibility at the start of the decade. In 10 years, he has become one of the biggest box office darlings. That also gives you hope that the baton has passed on from the Khans. Let us tell you more about this...

Khans not a necessity at the box office

It was difficult to imagine big blockbusters at the box office without Shah Rukh, Aamir or Salman Khan headlining it. In fact, only a year before this decade started, Salman's career was resurrected with Wanted (2009) and in 2010, he started the hugely successful Dabangg franchise. But by the end of it all, the three of them are on shaky grounds. Today, a film with Ranbir Kapoor (Sanju), Ranveer Singh (Simmba), Shahid Kapoor (Kabir Singh) or Vicky Kaushal (Uri: The Surgical Strike) in the lead can make more than their films. We will still go lax on Aamir who saw his first flop as the main lead after 10 years with Thugs Of Hindostan. And yet, it happened!

And the first ever "Non-holiday" release to enter 300 crore club in the history of Bollywood!❤️❤️ #Sanju pic.twitter.com/DYKsZimWeR

In Bollywood, content always played an important part but as long as formulas were working, not much attention was paid to it. 'Keep your brains at home' had become the most abused term in every critics' review and then something changed. In the last five years, the content has shown its might and today, that's one of the biggest criteria to make films work. Look at Andhadhun, Stree, Bareilly Ki Barfi, Sanju, Bala...

Budget correction is one other thing that was on a rise in the last decade. Filmmakers figured out that films can bring in laurels if mounted on a controlled budget too. Economics of a film has started to play an important part in becoming hits at the box office. Say, for example, Dear Zindagi. It had a Shah Rukh Khan but was made at a budget of Rs 35-40 crore and earned Rs 68 crore or more.

Nobody is saying biggies shouldn't be made. The last decade also proved that with a big budget and good execution you can be Baahubali at the box office. If you don't stick to that, you will be nothing but Thugs Of Hindostan. BTW, Baahubali 2 is still the biggest hit of Indian Cinema with its Hindi dubbed version earning more than Rs 500 crore...beat that!

Good conversations and even better company. #DearZindagiTake2 out soon! pic.twitter.com/0zgPtemWiO

Hollywood always had fans in India. But it had never been a big threat to Bollywood, which changed since The Avengers became a thing. In the last decade, Hollywood films have managed to do business which many Hindi films couldn't. Take for example the last Avenger movie... Endgame is the highest-grossing Hollywood film in India with Rs 373.22 crore in its pocket! In fact, The Jungle Book gave Shah Rukh Khan's Fan the chills at the box office by bumping it off within days. There was a time when Hollywood studios used to adjust their India dates to not clash with a local biggie. Now it's the other way round!

Post Narendra Modi's selection as PM, Bollywood movies has seen a sea change in the way the narratives are written. You will often find a film having the colour of chest-thumping nationalism. We think Akshay Kumar should get an award for single-handedly making that a saleable quotient in his films. Only he could have made a hero out of his character in Rustom who killed his wife's lover in cold blood and made it work in his favour, after adding a patriotic angle. It also made Uri a successful film and we are pretty sure it will continue that way for a few more years to come. However, there are movies that randomly add nationalism just for the sake of it. Case in point, the recent Pagalpanti did a pathetic job of ingesting it in its narrative and was dismantled from the box office.