Konkana Sen Sharma Birthday Special: Five Movies Of The Actress That Prove What A Versatile Performer She is

Konkana Sen Sharma celebrates her birthday today, which gives us the reason to go on a binge-watch of her movies. We have picked five of them for you as well. 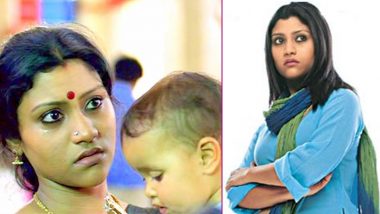 In the Hindi film industry, we have a few stars that shine brighter than anybody else. One such gem is Konkana Sen Sharma. She is such a natural in front of the camera that it never comes across as acting to us. Konkana has this amazing ability to get into the skin of a character seamlessly. Be it the gullible and reformed journalist in Page 3 or be a wily struggler in the film industry who gets used by her boyfriend, she has slipped into these characters seamlessly. That innocent and knowing smile is simply gorgeous. Dolly Kitty Aur Woh Chamakte Sitare: Ishaan Khatter Reveals How Mother Neelima Azeem’s Scene in Bhumi Pednekar, Konkana Sen Sharma’s Netflix Film Made Him Cry

But these days, Konkana's works have become quite limited which obviously is a disadvantage to us. Watching an actress of her caliber on screen is the biggest delight that we have. So on her birthday, we thought we will list down five of her movies that displayed her versatility to the fullest.

This was the movie that gave Konkana nationwide recognition. She actually lived the character of a South Indian wife with so much sincerity that it won her the National Award.

Everyone loves to know what goes on at Bollywood parties. Page 3 attempted to bare it all in that respect and Konkana played a journalist really well. It's such a rewarding role to see her evolve as a journalist in the film and also add meaning to the profession.

Konkana's role may not be a long as the rest of the cast but she had a crucial part to play in the film which is an adaptation of Shakespeare's Othello. She is playful and brash at one point while at other she is a determined woman to right the wrong.

She is an acting aspirant who is ready to go to any lengths for her dream. The last scene in the movie is perhaps the most exciting one when she decides to let go of the past and embrace what she has. What a brilliant movie and character!

(The above story first appeared on LatestLY on Dec 03, 2020 08:20 AM IST. For more news and updates on politics, world, sports, entertainment and lifestyle, log on to our website latestly.com).