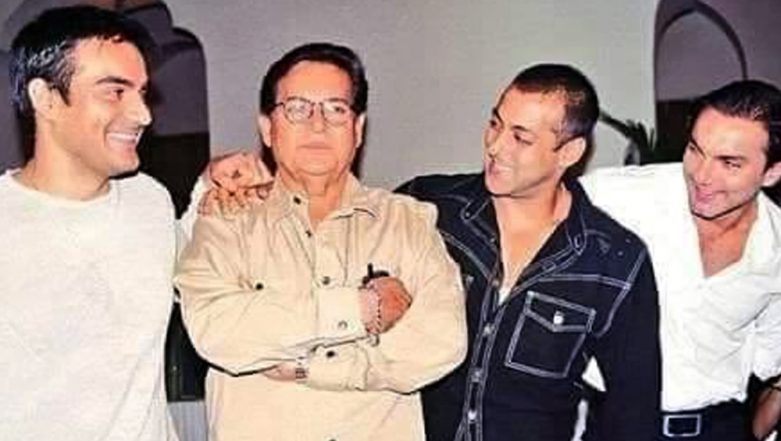 Bollywood celebs are busy wishing their daddy dearest a very Happy Father's Day and Salman Khan is no different. The actor took to his Twitter account to share a throwback picture with brothers Arbaaz, Sohail and father Salim Khan. With no extended captions or any heartwarming message, the Bharat actor kept it very basic and tweeted saying Happy Father’s Day daddy. Now the picture is damn adorable and it's taking us back to his Tere Naam days. Father's Day 2019: From Shah Rukh Khan to Shahid Kapoor, Bollywood's Dads and Their Cutest Pictures With Their Kids.

How will you react if we say that Salim Khan was never keen about Salman entering Bollywood? He was convinced that the Dabangg star will be a director since he wasn't good-looking enough to be an actor. The actor was eventually recognised by a photographer and he asked him to be a part of an ad campaign. From being someone who wasn't good looking to nation's most eligible bachelor, Salman has definitely come a long way and he credits his father for the same. Father's Day 2019: From Shahid Kapoor to Shah Rukh Khan and Anil Kapoor, Take a Look at B-town's Most Fashion Conscious Dads.

Nobody like u dad. Happy father's day every day, every moment, every breath I take . pic.twitter.com/yp9gBWGNmn

Salman is very close to his entire family and Salim Khan's advice means the most to him. While actors like Varun Dhawan, Ranveer Singh, Anushka Sharma and Tiger Shroff have already penned some beautiful words for their fathers, Salman had to join this league and we are glad he did. We are on our way to frame this picture and we suggest you can join us too.