Shershaah: Sidharth Malhotra Shares Thoughts on Being Honoured at the Himalayan Film Festival for His Movie on Captain Vikram Batra 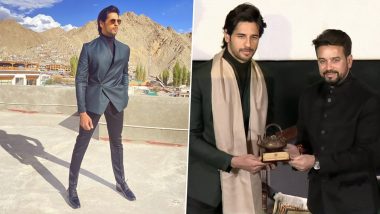 After Shershaah inaugurated the ongoing Himalayan film festival in Leh, Bollywood actor Sidharth Malhotra, who attended the festival, on Saturday, shared his thoughts on receiving the honour. The festival had opened on Friday with the screening of Shershaah, a movie that intricately showcased the inspiring life and valorous charm of PVC Captain Vikram Batra, who was martyred while fighting for his nation in the treacherous terrains of Kargil. Sidharth Malhotra to Attend Shershaah's Special Screening at First Himalayan Film Festival.

In honour of the brave war hero, whose story deeply moved everyone through the film, the cast and creators of the movie were invited to Ladakh's first edition of THFF.  Sharing his thoughts on receiving the felicitation, Sidharth said, "It has been one of my greatest honour in life, to wear Captain Vikram Batra's uniform on screen. It is really exciting to see the kind of impact the film has made, in India and around the world. It is my great pleasure to be opening the first edition of The Himalayan Film Festival with Shershaah and imprint the legacy of our war hero on such a prestigious platform." Shershaah: Sidharth Malhotra Inaugurates the 1st Himalayan Film Festival, Shares Pictures on Social Media.

Adding further, the movie's director Vishnu Varadhan said, "I am very grateful to the Indian Army and the people of Ladakh for allowing us to showcase this incredibly inspiring story with utmost authenticity. Shershaah will always hold a special place in each of our hearts and I am honoured to present our film at the festival." The Himalayan film festival, which commenced on September 24, was a part of the celebrations of 'Azadi ka Amrit Mahotsav' that commemorates 75 years of India's Independence.

The screening of 'Shershaah' was also attended by Anurag Singh Thakur, the Union Minister of Information and Broadcasting and Youth Affairs and Sports, along with Radha Krishna Mathur, Lt Governor, Ladakh, Advocate Tashi Gyason CEC, LAHDC Leh, Jamyang Tsering Namgyal, Member of Parliament, Ladakh, Umang Narula, Advisor to Lt. Governor, Padma Angmo, Secretary, Administration of Union Territory of Ladakh. Sharing his thoughts on cinema providing a prominent platform to the culture of the country, Anurag Singh Thakur, said, "Movies like 'Shershaah' remind many generations of the valour of our soldiers who fought bravely in the wars. Such movies are a great contribution that will inspire generations to come."

After attending the festival Sidharth had also shared an Instagram post bidding farewell to the festival. He wrote, "Thank you Leh for being a warm host yet again! Until we meet next time..." Apart from Sidharth, Kiara Advani, Shiv Panditt, Raj Arjun, Pranay Pachauri, Himanshu Ashok Malhotra, Nikitin Dheer, Anil Charanjeett, Sahil Vaid, Shataf Figar and Pawan Chopra among many others also acted in the hit war drama. Directed by Vishnu Varadhan, 'Shershaah' was released on August 12.