Sonu Sood as Raj Comics' Nagraj is such an amazing sight. We aren't making this up because the actor did shoot a commercial wearing that green costume many years ago when he was just starting out. It does leave him embarassed now. 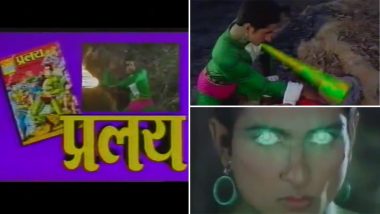 Not many may remember that Sonu Sood, who is hailed as a messiah today, started his career as a superhero. Our very own Indian superhero Nagraj. An old TV commercial has him wearing the green costume of the Raj Comics character and shooting and spitting fires at the enemy. Initially, you will find it difficult to recognise him. This is the first role ever back in the day when he had just ventured into the entertainment world. The commercial may have been made keeping the taste of that time in mind but watching it now does make you chuckle. Sara Ali Khan Contributes Towards Sonu Sood’s Charity Foundation for COVID Relief

When Sonu was asked about this old commercial of his during The Kapil Sharma Show, he sounded quite embarrassed. Check out the old commercial first... Sonu Sood: Those Who Couldn’t Save Loved Ones, You Didn’t Fail, We Did

Do look for Sonu Sood's character poster on the comic book cover. He looks damn fit and quite dashing as the King of Serpents, Nagraj.

Sonu even added, "0nce in Lajpat Nagar Market, I saw a comic book with my photograph on it. I felt embarrassed thinking that I wasn’t like that at all. My sister-in-law told me to buy one to keep it as a memory, ‘you will feel good seeing this when you become a star.’ I told her I don’t want to. I didn’t buy it but now I regret that I don’t have that memory of being Nagraj.”

Well, the internet never forgets anything Sonu and so here's the video for you.

(The above story first appeared on LatestLY on May 17, 2021 11:48 AM IST. For more news and updates on politics, world, sports, entertainment and lifestyle, log on to our website latestly.com).