Anson Mount, who is getting a positive response for his performance as Captain Christopher Pike in the recently released series Star Trek: Strange New Worlds, recently opened up about his first meeting with Sir Patrick Stewart 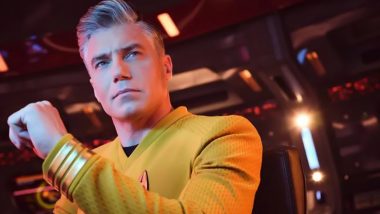 Anson Mount, who is getting a positive response for his performance as Captain Christopher Pike in the recently released series Star Trek: Strange New Worlds, recently opened up about his first meeting with Sir Patrick Stewart, who is known for immortalising the character of Captain Jean-Luc Picard in the 'Star Trek' franchise. Chris Pine Says He Doesn’t Know ‘anything’ About the ‘Star Trek 4’ Story Yet ‘We’re All … – Latest Tweet by Fandom.

In a roundtable conversation with IANS, the 49-year-old actor recollected the events of the past, as he said, "I have grown up watching the original 'Star Trek' series in syndication when I was about eight years old. And then the next viewing happened around junior high, for me. Atlanta, Bridgerton, Star Trek: Picard and More Make Up Our March Binge Guide. – Latest Tweet by Rotten Tomatoes.

"It's funny because Patrick Stewart was a very young man when I was in graduate school with mutual family friends. We once went to see him perform in 'The Tempest' at the Broadway. I remember I was absolutely star-struck as a 22-year-old."

"He took us for dinner afterwards. My friend asked him, 'Patrick what's next for you?' to which he said, 'I think I want to do the Scottish play, 'Macbeth' to first really f*** it up completely and second time to do it correctly. I remember saying to myself, 'Wow! that's commitment'", he added.

Sharing what appealed the most to him about this character, he said, "The quality of this character that really appealed to me was the depth of his empathy which requires a great deal of humility. He's not afraid to go wrong. In fact, the way he runs the bridge is very fascinating. Despite his powers, he is never afraid to experiment and that really intrigues me and inspires me in a way."

The actor also shared that he has been wanting to travel to India for a very long time but his plans are foiled by new job offerings the moment he decides to jet off to India, "I have been willing to travel to India for a very, very long time but every time I have booked the ticket I got a new job as an actor and that plan hasn't materialised as of yet but I really look forward to visiting the beautiful country." Star Trek: Strange New Worlds is available to stream on Voot Select.

(The above story first appeared on LatestLY on May 11, 2022 07:20 PM IST. For more news and updates on politics, world, sports, entertainment and lifestyle, log on to our website latestly.com).