We search for gripping content on the OTT platforms every week, so that audience can chill and binge-watch what they prefer and want. This week we have some great releases on OTT, let's quickly take a complete look at the series and movies releasing on the OTT platforms this week. 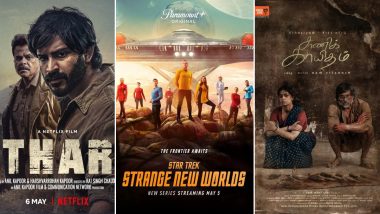 We are stepping on to the first week of May 2022 and with that there are several promising series and movies, releasing on OTT platforms like Voot Select, Amazon Prime Video, Netflix, Disney+ Hotstar, SonyLIV and more. Talking about the biggest release of the week it would be Thar, which will drop on Netflix on May 6. Helmed by Raj Singh Chaudhary, the synopsis of the thriller reads, "A veteran cop sees the chance to prove himself when murder and a stranger's grisly torture plot shake the walls of a sleepy desert town." The movie stars Anil Kapoor, Son Harsh Varrdhan Kapoor and Fatima Sana Shaikh in key roles. Thar Trailer: Anil Kapoor, Son Harsh Varrdhan Kapoor and Fatima Sana Shaikh’s Netflix Thriller About Solving a Murder Case Looks Mysterious (Watch Video).

Another big release of the week would be Star Trek - Strange New Worlds, which is all set to stream on Voot Select from May 5. The sci-fi series is a spin-off from Star Trek: Discovery and a prequel to Star Trek: The Original Series. The web show stars Anson Mount, Rebecca Romijn, and Ethan Peck in major roles. Another interesting release of the week would be Saani Kaayidham, which will release on Amazon Prime Video on May 6. Directed by Arun Matheswaran, the revenge drama sees Keerthy Suresh and Selvaraghavan in pivotal roles, among others. Saani Kaayidham Trailer: Keerthy Suresh As Ponni And Selvaraghavan As Sangaiyyah Are Here To Amaze You In This Bloody Revenge Drama (Watch Video).

(The above story first appeared on LatestLY on May 01, 2022 04:53 PM IST. For more news and updates on politics, world, sports, entertainment and lifestyle, log on to our website latestly.com).