Mallika Sherawat turns 43 today. The actress should all the credit possible when it comes to pushing the envelope in Indian cinema when it comes to boldness. So, on Mallika's birthday, we are listing some of the movies that definitely deserve to be watched or rewatched. 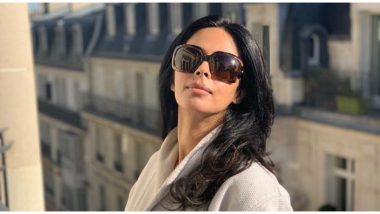 Mallika Sherawat turns 43 today. The actress should all the credit possible when it comes to pushing the envelope in Indian cinema when it comes to boldness. Bold scenes were still a big no-no as per our 'culture' when the actress was doing movies like Murder. And you see, how cool and casual lip-lock scenes are today in Bollywood? Mallika Sherawat walked so that actors today can run. The actress has featured in some pathbreaking movies in her time in Bollywood. While some are popular some are yet to be given more attention to. Mallika Sherawat Reveals Her Relationship Status And Talks About Embracing Motherhood.

So, on Mallika's birthday, we are listing some of the movies that definitely deserve to be watched or rewatched. If we miss any, feel free to tweet to us @Latestly. Monsoons With Mallika Sherawat: Vadapaav, Fitness and Ghosts Discussed-Video!

This movie has been a coming-of-age film for an entire generation. Sensuality and sex were such a taboo back then. This film definitely helped open the door for conversations. Mallika had the guts to choose the bold role.

Of course, we all know about this film. But have we all watched it? This movie was a hit but it surely deserves to be more popular. The storyline and the execution of the film were brilliant. "Pyaar Kar Ke Pachataya" is still a banger.

Mallika played the leading lady in Govind Menon's Khwahish. The movie became popular for the number of kissing scenes she had with co-star Himanshu Malik. But just to bring things into perspective, there is a scene in the movie when Mallika goes out to a medical store to buy condoms because her husband was feeling shy. So cool!

Mallika wanted to keep her role a mystery. She requested the producers to let her be the surprise package. Well, makers did not pay heed to her. The movie went on to become a blockbuster. But, maybe, just maybe, Mallika's surprise plan might have worked better.

The movie was critically panned upon its release. But it is not that bad. There are hilarious moments that will make you laugh. And there are certain social issues that have been satirised.

Mallika was last seen on screen in the web-series, Booo, on AltBalaji. Well, the fans definitely tuned into the web-show to watch Mallika. We hope we get to see Mallika in a substantial role very soon. A very Happy Birthday to the woman who taught a generation to be bold and beautiful.

(The above story first appeared on LatestLY on Oct 24, 2019 08:00 AM IST. For more news and updates on politics, world, sports, entertainment and lifestyle, log on to our website latestly.com).