Delhi Chief Minister Arvind Kejriwal on Sunday talked about his government in Delhi and governance in Gujarat. 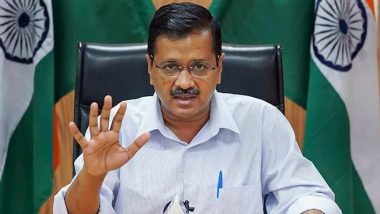 Ahmedabad, July 3: Delhi Chief Minister Arvind Kejriwal on Sunday talked about his government in Delhi and governance in Gujarat.

Citing BJP's 17-member delegation's two-day visit to Delhi for a reality check of schools and Mohalla Clinics, Kejriwal said, "Even after two days' visit, they could not find any shortcomings. This shows the performance of the AAP government in Delhi." Delhi CM Arvind Kejriwal Says 'We Are Not Afraid of Any Investigation, Raid or Arrest'

Kejriwal further said: "The AAP government always welcomes constructive suggestions and criticism if it is good for the people at large. If any lapses are brought to our knowledge, we act at the earliest."

He administered the oath to 6,988 office bearers of the party to be "honest, to serve the country and the people of Gujarat, build Gandhi and Sardar's dream of Gujarat."

In Gujarat, only two parties are actively campaigning -- AAP and BJP. The Congress is not visible anywhere, he said.

Earlier, speaking to media persons, Kejriwal condemned barbaric murder of Kanahiya Lal in Udaipur and he hoped that the accused gets severe punishment for such heinous crime. He also said it is not a time for finger-pointing.

"AAP's base is expanding, workers should not be afraid of anyone," said Sandeep Pathak, AAP's Gujarat in-charge and he also advised party workers that "When you are running Bijli campaign, trust yourself, people are with you."

(The above story first appeared on LatestLY on Jul 03, 2022 07:42 PM IST. For more news and updates on politics, world, sports, entertainment and lifestyle, log on to our website latestly.com).