Delhi Deputy Chief Minister Manish Sisodia on Monday said that the AAP-led Delhi government is making all possible efforts to procure COVID-19 vaccines for every citizen in the national capital. 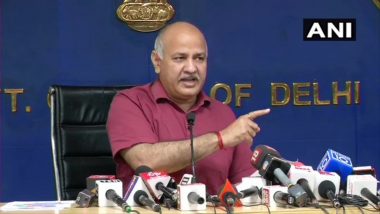 New Delhi, May 31:  Delhi Deputy Chief Minister Manish Sisodia on Monday said that the AAP-led Delhi government is making all possible efforts to procure COVID-19 vaccines for every citizen in the national capital.

Addressing a digital press conference, Sisodia hit out at the Bharatiya Janata Party (BJP) saying, "BJP is trying to hide its failure of COVID-19 management and for that they are abusing Kejriwal time and again. First, they stopped Delhi's oxygen supply, for that we reached the court and finally oxygen was supplied. And now, when Kejriwal demands vaccines to administer these to all Delhi's citizens before the third wave, BJP's leaders have again started abusing Kejriwal," alleged Sisodia.  Lockdown in Delhi Extended by One More Week Till 5 AM of May 31, Says CM Arvind Kejriwal

He further stated that no matter what BJP's leaders say to Kejriwal or the AAP Government, the demand for vaccines will continue till every person in Delhi is vaccinated.

There has been a political war brewing between the Delhi government ruled by AAP and the BJP on shortage of vaccines, with AAP accusing the Centre of exporting Indian-made vaccines.

On Sunday, BJP chief JP Nadda had hit out at Kejriwal saying, "There are people who, in the name of vaccines, broke India's morale, Delhi's morale.

In response to that, Kejriwal said on twitter, "My goal is to save lives, not vaccines."

(The above story first appeared on LatestLY on May 31, 2021 04:09 PM IST. For more news and updates on politics, world, sports, entertainment and lifestyle, log on to our website latestly.com).