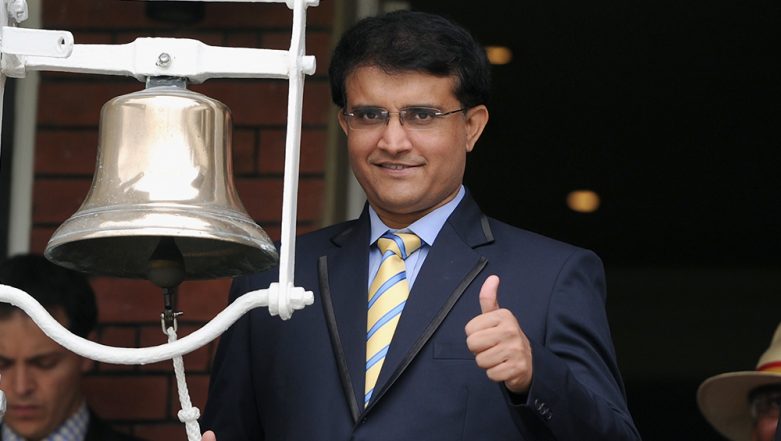 Former Indian Captain Sourav Ganguly commonly known as 'Dada' turns 47 today and wishes are pouring in for him from all around the world. The 'Prince of Kolkata' was born on July 8, 1972. Sourav Ganguly is a well-known face in the world of cricket and as a result, Twitter is flooded with Birthday wishes for the former captain. People from Cricket fraternity including VVS Laxman, Virender Sehwag, Wriddhiman Saha, and others have showered their wishes with special birthday messages. Have a look at some of the posts related to Dada's Happy Birthday wishes. Sourav Ganguly Turns 47: On Dada's Birthday Let's Have a Look at 5 Times When Bengal Tiger Trolled the Opponents Like a Boss in the Commentary Box.

Ganguly holds a special place in the Indian cricket history as he has changed the face of Indian cricket. The 'Men in Blue' tasted some great success under him like the Natwest Trophy in 2002 and he also led India to the 2003 World Cup Finals.  He was known for his fierce captaincy style and many great players like Yuvraj Singh, Harbhajan Singh, and Virender Sehwag credit him for their success. Along with his captaincy, the southpaw has a phenomenal record as a batsman too. In his twelve years long career, the former cricketer has played 113 tests scoring 7212 runs with 16 hundred while in 311 ODI's he has amassed 11363 runs with 22 tons. Sourav Ganguly Birthday Special! Being Righty to Nickname 'Maharaja', Five Interesting Facts About Dada You May Have Not Known.

Virender Sehwag's wishes 'DADA' in his own style!!

Many more happy returns of the day @SGanguly99 ! Wish you ever more success and love #HappyBirthdayDada pic.twitter.com/qM2qraIFtT

Happy Birthday to a man who brought about a fantastic transition in Indian cricket, a brilliant leader who backed guys he believed in to the fullest . But aise kaun chadhta hai , Dada @SGanguly99 #HappyBirthdayDada pic.twitter.com/tuOwPejGm1

Cricket World Cup wished Dada with some highlights of his career

The god of off-side has entertained one and all while batting with Sachin Tendulkar and was a treat to watch as a captain in the field. The former's career was also filled with many controversies along with the glory. From waving his jersey in Lord's balcony to the Greg Chappel Saga, Dada has always been in the limelight. But nothing can deny his massive contribution to Indian Cricket. In his second innings, Sourav Ganguly is serving as a commentator in the ICC Cricket World Cup 2019. Along with that, he is also the head coach of Delhi Capitals and will try to produce many more great players for Indian Cricket