What is a Cyclone? Know All About Cyclonic Storms Ahead of 'Nisarga', Which is Expected to Make Landfall at Maharashtra Coast Near Alibaug On June 3

Cyclone "Nisarga" is heading towards Maharashtra and Gujarat coasts. Cyclone “Nirsarga” is likely to intensify into a "severe cyclonic storm" in the next 12 hours. It is expected to make landfall in Alibaugh, adjoining Mumbai. Heavy rains will lash the maximum city, Thane and Palghar districts. 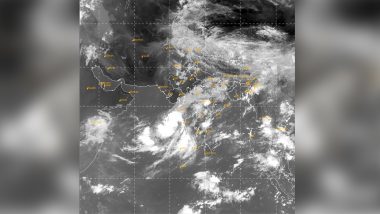 Cyclone "Nisarga" is heading towards Maharashtra and Gujarat coasts. Cyclone “Nirsarga” is likely to intensify into a "severe cyclonic storm" in the next 12 hours. It is expected to make landfall near Alibaugh, adjoining Mumbai. Heavy rains will lash the maximum city, Thane and Palghar districts. It will be the first time that any Cyclone will make landfall in Mumbai in June. India will also face the second cyclone in two weeks after Cyclone Amphan wreaked havoc in West Bengal. When Will Cyclone Nisarga Hit Mumbai? What Will be The Wind Speed Over Next 2 Days? Here's What IMD Has Said.

The India Meteorological Department (IMD) said that Nisarga Cyclone is moving towards Maharashtra coast and will amplify into a severe cyclonic storm by the evening of June 3, making landfall near Alibag with a maximum wind speed of 100-110 kmph gusting to 120 kmph. Alibag is a coastal town in Raigad District of Maharashtra, which is about 94 km south of Mumbai.

Now let us Understand What is Cyclone?

A cyclone is a large scale air mass that rotates around a strong centre of low atmospheric pressure. Cyclones are characterised by inward spiralling winds that rotate about a zone of low pressure. The largest low-pressure systems are polar vortices and extratropical cyclones of the largest scale. Cyclogenesis is the process of cyclone formation and intensification.

There are three types of cyclones - Tropical cyclones, Polar cyclones and mesocyclone. Cyclones can transit between extratropical, subtropical, and tropical phases. Mesocyclones form as warm core cyclones over land, and can lead to tornado formation. In the Atlantic and the northeastern Pacific oceans, a tropical cyclone is generally referred to as a hurricane.

According to IMD's Cyclone E-Atlas, no weather system has turned into a cyclone and made landfall along the Maharashtra coast during June. According to the National Cyclone Risk Mitigation Project, only 25 per cent cyclones that develop in the Arabian Sea approach the West Coast.

In May, Cyclone Amphan made landfall in West Bengal causing Severe damages in Kolkata, Howrah, Hooghly, North and South 24 Parganas districts and surrounding areas. According to reports, 98 people lost their lives due to Cyclone Amphan. Several buildings were damaged, glass windows were broken, and cars also bumped into one another as winds with speeds over 100km/hr pummelled through Kolkata, leaving behind a trail of destruction.

(The above story first appeared on LatestLY on Jun 02, 2020 06:23 PM IST. For more news and updates on politics, world, sports, entertainment and lifestyle, log on to our website latestly.com).