Netizens shared terrifying videos and pictures of the cyclone which the city was witnessing after a long time. Several buildings were damaged, glass windows were broken, and cars also bumped into one another as winds with speeds over 100km/hr pummeled through Kolkata, leaving behind a trail of destruction. 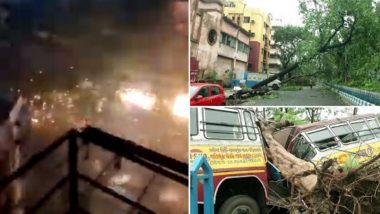 Kolkata, May 21:  Cyclone Amphan, which turned into a super cyclonic storm, wreaked havoc in parts of West Bengal on Thursday. The heavy rains and the high-intensity winds damaged the roofs of several buildings and uprooted a massive number of trees across Kolkata and its adjoining Howrah district. Netizens shared terrifying videos and pictures of the cyclone which the city was witnessing after a long time.

Cyclone Amphan made landfall in West Bengal on Wednesday and caused severe damages in Kolkata, Howrah, Hooghly, North and South 24 Parganas districts and surrounding areas.  Chief Minister Mamata Banerjee during her address to the reporters on Wednesday night said that "Situation is more worrying than the coronavirus pandemic. We don’t know how to handle it." She further added that almost everything is destroyed along the coastal villages of the state. Cyclone Amphan Update: 'Super' Cyclonic Storm Weakens Into Cyclonic Storm, IMD Issues Heavy Rains Warning For Assam And Meghalaya.

Several buildings were damaged, glass windows were broken, and cars also bumped into one another as winds with speeds over 100km/hr pummeled through Kolkata, leaving behind a trail of destruction.

Here are a few terrifying videos and images of the damage which cyclone Amphan did to the city:

Electric outage in Phool Bagan, Kolkata caused due to the cyclone. Please pray for the ones who are not fortunate enough to have proper shelter in these challenging times. #CycloneAmphan #CycloneAmphanUpdate #AmphanSuperCyclone #Amphan pic.twitter.com/Lx2FsOyc0e

It seemed like the end of the world, to be honest! But we survived ... Mostly! #AmphanCyclone #AmphanSuperCyclone pic.twitter.com/9OP94brqAD

#CycloneAmphan hitting Kolkata. Video via a friend living there. Prayers for the safety of all. pic.twitter.com/aEQHUSZgbQ

Below are a few images

West Bengal: Trees uprooted & waterlogging in several parts of Kolkata in wake of #CycloneAmphan. The cyclone is very likely to weaken into a deep depression during the next 3 hours as per India Meteorological Department (IMD). pic.twitter.com/f81DZw3a0W

After the storm. #Kolkata #Amphan pic.twitter.com/BVmdRQZGNO

After the storm. #Kolkata #Amphan pic.twitter.com/BVmdRQZGNO

Power outages have been reported from several parts of the city. Cellphone, cable and internet connections continue to be affected in several areas of the city.  According to the latest update from IMD,  Amphan weakened into a cyclonic storm on Thursday. Cyclone Amphan is currently moving north-northeastwards and may cause heavy rains in Assam and Meghalaya today.

(The above story first appeared on LatestLY on May 21, 2020 10:14 AM IST. For more news and updates on politics, world, sports, entertainment and lifestyle, log on to our website latestly.com).