After hoisting the tricolour at the police lines here on the 75th Independence Day, the chief minister paid tributes to the freedom fighters. He also saluted soldiers who laid down their lives for the country's unity and integrity, saying being the son of a soldier himself, he is aware of the struggles the families of those in the armed forces go through. 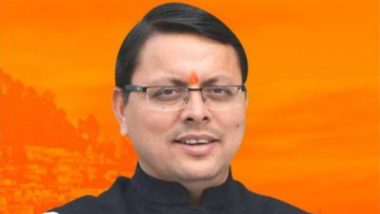 Dehradun, August 15: Uttarakhand Chief Minister Pushkar Singh Dhami made a slew of announcements here on Independence Day including distribution of free tablets for the students of Class 10 and 12. He announced setting up a high-level committee to address apprehensions about land laws and instituting an award in the name of noted environmentalist Sunderlal Bahuguna.

After hoisting the tricolour at the police lines here on the 75th Independence Day, the chief minister paid tributes to the freedom fighters. He also saluted soldiers who laid down their lives for the country's unity and integrity, saying being the son of a soldier himself, he is aware of the struggles the families of those in the armed forces go through.

Dhami said Uttarakhand is doing well on growth indexes and there is no reason to believe that it will not be among the most developed states in the country in coming years. Making the announcements for Uttarakhand, he said, "Children are our future. We have started Vatsalya Yojana to take care of children who have lost their parents to the Covid pandemic. They will get a monthly allowance of Rs 3,000 under the scheme up to the age of 21. Now we have decided to provide free tablets for the students of class 10 and 12." Uttarakhand CM Pushkar Singh Dhami Hoists the National Flag on 75th Independence Day.

The chief minister said the state government has also decided to constitute a high-level committee to address the apprehensions about the land laws in the state besides instituting Sunderlal Bahuguna Prakriti Sanrakshan Award to be given for distinguished work in the field of environment and nature conservation. Showering praise on Vandana Kataria for her fabulous performance in women's hockey at the Tokyo Olympics, Dhami said she has done the state proud.

"Enthused by her success, we have decided to frame a new sports policy to support and nourish budding talent in the field of sports.” Dhami said the state government has also made a recommendation to the Centre to confer noted folk singer from the state Narendra Singh Negi with the Padma award.

He said he has entrusted former MP Manohar Kant Dhyani to look into the Devasthanam board issue and submit his report to the state government after which a well thought out decision on the matter will be taken. Dhami spoke of steps taken by the state government to provide a corruption-free and transparent administration to the people, strengthening the public delivery system through greater accountability on part of officials and strengthening the rural economy through the homestay policy.

He also highlighted steps taken by the central and state governments for boosting road and rail connectivity in Uttarakhand. The chief minister said the country has fought a successful battle against COVID-19 under the leadership of Prime Minister Narendra Modi. There are enough oxygen cylinders, ventilators, beds and separate wards for children at the hospitals in the state including PHCs and CHCs (primary and community health centres), he said.

Dhami also praised the Modi government for making notable achievements during the last seven years. "Things which were unthinkable until just a few years ago have been achieved. Article 370 has been revoked in Jammu and Kashmir and the way for construction of a Ram temple in Ayodhya was paved under the Prime Minister's decisive leadership.”

A number of programmes were held across the state to mark Independence Day. The chief minister also hoisted the national flag at his official residence and attended a flag hoisting ceremony at the BJP's state office on Balbir Road.

He also flagged off a "run for the country" (Ek Daud Desh Ke Nam) organised by BJP Yuva Morcha from the Pavilion Ground in the presence of pradesh BJP president Madan Kaushik.

Governor Baby Rani Maurya hoisted the national flag at Raj Bhavan. He expressed gratitude to the freedom fighters and martyrs who made the supreme sacrifice for the sake of the country's freedom.