Homosexuality No More a Crime: Tears of Joy, Celebrations Across India as Supreme Court Partially Strikes Down Section 377 of IPC; Watch Videos 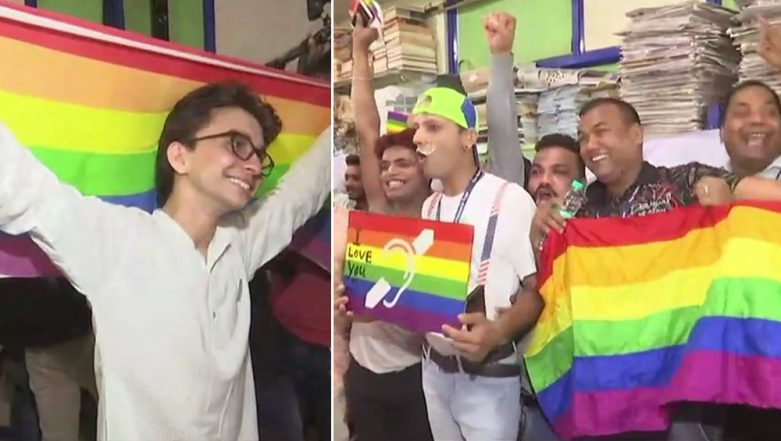 "Mumbai, September 6: There were tears of joy, celebrations, applause and cheers as the Supreme Court pronounced a historic verdict, partially striking down Section 377 and decriminalising homosexuality. In its verdict partially scrapping the 157-year-old law, the Supreme Court made strong observations in favour of the LGBTQ community. The historic judgment was a consensus verdict by a five-judge bench headed by Chief Justice Dipak Misra and comprising of Justices RF Nariman, AM Khanwilkar, DY Chandrachud and Indu Malhotra.

"We have finally got justice. We are finally 'azaad in azaad Hind'," said Ashok Row Kavi, LGBT rights activist and founder of Humsafar Trust. People in Chennai celebrated with a cake-cutting session while many in Mumbai were seen dancing and hugging each other in joy. Outside the Supreme Court, there were similar scenes as LGBTQ activists held banners, jumped in happiness as they heard the verdict. Highlights of the Supreme Court verdict on Section 377

There were celebrations at The Lalit Hotel in Delhi with a dance performance after the Supreme Court legalised homosexuality. Keshav Suri, the executive director of Lalit Group of hotels, is a prominent LGBT activist.

See Videos and Pictures of Celebrations After The Verdict

While reading out his judgment today, CJI Dipak Misra said, "No one can escape who they are." "No one can escape from their individualism. Society is now better for individualism. In the present case, our deliberations will be on various spectrums," he observed. He said that criminalising carnal sex is irrational. “I am what I am. So take me as I am," CJI Dipak Misra said citing John Mills. Live updates on Section 377 verdict and reactions

Justice Indu Malhotra in her judgment said, "History owes an apology to LGBT persons for ostracisation, discrimination." Justice DY Chandrachud in his judgment said, "This case is much more than just decriminalising a provision It is about an aspiration to realise Constitutional rights and equal existence of LGBT community as other citizens."

"Section 377 of the IPC insofar as it criminalises consensual sexual acts between man and man, man and woman or woman and woman is unconstitutional and struck down. Sex with animals will, however, remain criminal," said the historic judgment.