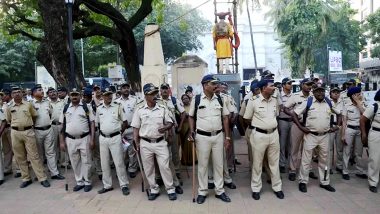 Mumbai, July 31: The Maharashtra government selected only 14 out of 36 districts of the state for pre-recruitment training of minority candidates for the post of police constables, reported The Times of India. The notification was issued by the development department on Thursday. The state government selected 14 districts and as many NGOs from each district for 2020-2021.

According to the report, the same districts were selected last year also to hold training camps. Several NGOs and social activists slammed the Uddhav Thackeray government for selecting the same districts which were selected by the Bharatiya Janata Party government in 2019. Maharashtra Govt Selects Same 14 Districts This Year Also For Minority Candidates's Pre-Recruitment Training For Police Constables.

The districts selected for pre-recruitment training of minority candidates for the post of police constables are - Wardha, Gadhchiroli, Amravati, Nanded, Jalna, Pune, Yuvatmal, Parbhani, Solapur, Aurangabad, Buldhana, Nasik, Beed and Akola. Notably, districts with high minority population such as Mumbai and Thane were left out.

“They have just copied t the previous BJP government’s list. There seems to be nepotism and high-handedness in the entire process of selection,” reported the media house quoting the activist  M A Khalid as saying. Khalid, along with other activists like Salim Alware and Afroz Malik have started a campaign to prepare minority youths to join the training camps.

(The above story first appeared on LatestLY on Jul 31, 2020 05:56 PM IST. For more news and updates on politics, world, sports, entertainment and lifestyle, log on to our website latestly.com).