According to the law, the civic body can seize pets if the owner does not have a proper licence. 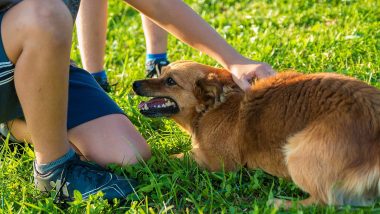 Thane, May 3: The Thane Municipal Corporation (TMC) has earned Rs 5 lakh in revenue after making pet licence mandatory last month. Last month, the city's veterinary department sent notices to housing societies across the city to obtain a licence in order to own a pet.

Since then, it has issued about 250 new licences while many other pet owners have renewed their existing licences. 'Man & Wife Pillars of Family, if One Breaks, Whole House Crashes', Says Delhi High Court.

According to a report in the Hindustan Times, a licence in order to own a pet has been made mandatory by the civic body. Officials from the civic body said that the laws existed before, however, they were not followed.

At present, the civic body has appointed additional staff under the veterinary department in order to complete the registration process. According to the law, the civic body can seize pets if the owner does not have a proper licence.

Dr. Kshama Sikandar, a veterinary officer of TMC said, "Obtaining a licence will help the civic body understand the number of pets in the city and make necessary provisions and facilities. As of now, we are providing licences after checking whether all necessary vaccinations for the pet have been completed."

He further added, "We shall gradually start levying a penalty on those who have not completed the registration process or not obtained a licence."

(The above story first appeared on LatestLY on May 04, 2022 06:59 PM IST. For more news and updates on politics, world, sports, entertainment and lifestyle, log on to our website latestly.com).