Nine Naxalites surrendered before police in Latehar district of Jharkhand 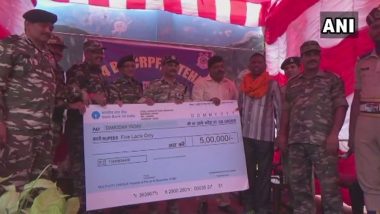 Ranchi, July 5: In a significant breakthrough for security forces, nine Naxalites surrendered before police in Latehar district of Jharkhand. Talking to media, the Naxalites revealed that they had to face a lot of problems in Naxalite camps. They also said that the nowadays principles of Naxalism is not being followed by the seniors in the camps.

Jharkhand: 9 naxals surrendered before Police in Latehar earlier today. They said,"There are lots of problem in the naxal camps and principles of naxalism are no longer followed by the seniors over there." pic.twitter.com/at7hvyNMsM

Latehar is one of the 24 districts of Jharkhand. Due to the considerable amount of Naxalite insurgency in the area, it is a part of Red Corridor.

In the recent attack by Naxalites in Jharkhand, six Jharkhand Jaguar personnel were martyred and four injured during a landmine blast. The incident occurred in Jharkhand’s Garwa district. The security forces have recently launched a massive anti-Naxalite operation in the hilly region of Burha Pahar range which is spread over 50 km.

(The above story first appeared on LatestLY on Jul 05, 2018 04:22 PM IST. For more news and updates on politics, world, sports, entertainment and lifestyle, log on to our website latestly.com).