Noida: Major Fire Breaks Out at Official Complex in Sector 59, No Injuries Reported 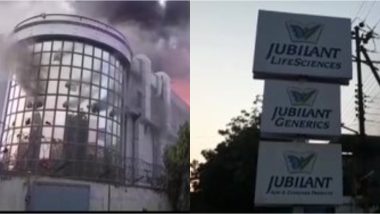 Noida, September 23: A major fire broke out at an office complex in Noida Sector 59 on Wednesday. Following the reports of the fire, emergency services were pushed and firefighters doused the fire. No casualty has been reported as of yet.

According to sources, the company at which the fire broke is of Jubliant Life Sciences. The reason for the fire is yet to be ascertained. At the time of the fire, a large number of people were present inside the complex but have already been evacuated.

Police had said, "There was no report of any harm to any person in the fire during which 102 people were evacuated from the building. Approximately 90 per cent of the blaze has been controlled and the operation is underway to fully douse it."

Here are the images:

Fire breaks out at an office complex in Noida Sector 59; fire fighting operation underway. Reason of fire is yet to be ascertained. pic.twitter.com/FgGIEtiUEf

Meanwhile, UP Chief Minister Yogi Adityanath had ordered senior officials to reach the spot immediately and provide relief work. He had also directed to take all possible measures to control the fire soon.

(The above story first appeared on LatestLY on Sep 23, 2020 07:31 PM IST. For more news and updates on politics, world, sports, entertainment and lifestyle, log on to our website latestly.com).