Petrol pump owners have alleged that they are being forced to display banners of Prime Minister Narendra Modi by state-owned oil companies. 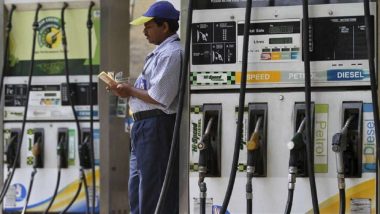 New Delhi, August 25: Petrol pump owners have alleged that they are being forced to display banners of Prime Minister Narendra Modi by state-owned oil companies. According to reports, dealers operating petrol pumps say oil companies like Indian Oil Corporation (IOCL), Hindustan Petroleum Corporation Limited (HPCL) and Bharat Petroleum Corporation Limited (BPCL) are threatening to stop supplies if they do not display PM Modi's photographs at their pumps. (Also Read: No GST on Petrol, Diesel in near future?)

As per a report in The Hindu, Consortium of Indian Petroleum Dealers (CIPD)  has received a verbal advisory from oil marketing companies asking them to arrange the display of PM Modi's images ahead of the 2019 Lok Sabha elections.

“They are asking us to display the picture of Prime Minister Narendra Modi in retail outlets and those who refuse are threatened with blocking of supplies,” the report quoted CIPD President SS Gogi as saying.

(The above story first appeared on LatestLY on Aug 25, 2018 12:56 PM IST. For more news and updates on politics, world, sports, entertainment and lifestyle, log on to our website latestly.com).