Prime Minister Narendra Modi on Monday morning arrived in Tokyo for a two-day visit. Japanese Prime Minister Fumio Kishida had invited PM Modi to participate in the Quad leaders’ summit as part of his two-day tour starting on Monday, May 23. 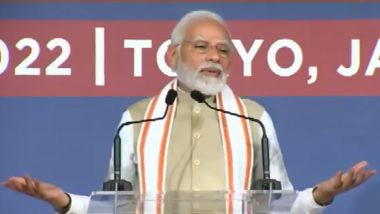 PM Modi, upon his arrival, interacted with children who were waiting to welcome him. "Welcome to Japan! May I have your signature please?", Ritsuki Kobayashi asked PM Modi in Hindi. Impressed by his fluency, PM Modi said, "Waah! Where did you learn Hindi from? You know it pretty well?"

#WATCH | "Waah! Where did you learn Hindi from?... You know it pretty well?," PM Modi to Japanese kids who were awaiting his autograph with Indian kids on his arrival at a hotel in Tokyo, Japan pic.twitter.com/xbNRlSUjik

While addressing the Indian diaspora, PM Modi said, “Swami Vivekananda once said every Indian should visit Japan once in their life. Today, I will say, every Japanese should visit India once in their life.” “I would urge everyone to join and take forward the campaign of ‘Bharat Chalo, Bharat se Judo,” he added. PM Narendra Modi Urges Youth of Japan To Visit India at Least Once.

Met top business leaders in Tokyo. Our conversations focussed on diverse topics ranging from innovation to investments, tech to textiles, reforms to StartUps. There is great enthusiasm towards India and there is great appreciation for the entrepreneurial skills of India’s youth. pic.twitter.com/5jSMehWjtv

(The above story first appeared on LatestLY on May 23, 2022 07:55 PM IST. For more news and updates on politics, world, sports, entertainment and lifestyle, log on to our website latestly.com).