Gehlot also expressed sadness at TV footage showing helpless people crying while their houses were being brought down. 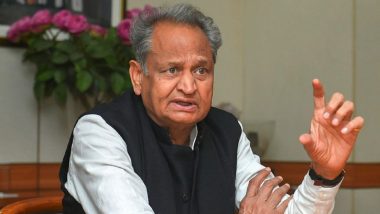 Jaipur, April 14: Rajasthan Chief Minister Ashok Gehlot on Thursday condemned the "bulldozer justice" saying neither the chief minister nor the prime minister has the power to get houses demolished by bulldozers.

"The right of demolishing houses via bulldozers does not lie even with the CM and PM," he said, adding "How can you raze a house without any investigation, without holding anyone accountable? What must be crossing an innocent's mind when on seeing his house being brought down like a pack of cards," he questioned. Contractor Suicide Case: Karnataka Minister K S Eshwarappa Announces His Resignation.

Commenting on the opposition without naming them, he said: "They say that innocent people have been arrested in Karauli violence. So can the Rajasthan government bulldoze their houses since they have been arrested?" he questioned.

He also expressed sadness at TV footage showing helpless people crying while their houses were being brought down.

"They were crying, they were poor and no one had the right to bring down their houses without fair investigation. Let law take its own course," he said and accused some state governments of flouting all laws and constitutional norms.

"They have endangered the nation by raiding establishments by misusing judiciary powers, ED and Income Tax. Youngsters have to understand which way is the nation going or else they shall have to pay the cost," he warned.

(The above story first appeared on LatestLY on Apr 14, 2022 08:29 PM IST. For more news and updates on politics, world, sports, entertainment and lifestyle, log on to our website latestly.com).