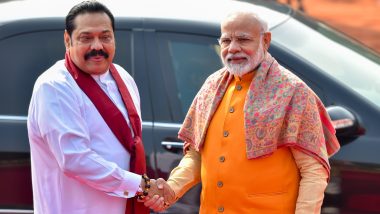 "PM Narendra Modi spoke to Sri Lanka PM Mahinda Rajapaksa today and congratulated him on successful conduct of parliamentary elections yesterday. Prime Minister commended the government and the electoral institutions of Sri Lanka for effectively organising the elections despite the constraints of the COVID-19 pandemic. He also appreciated the Sri Lankan people for their enthusiastic participation in the elections, and said that this reflected the strong democratic values shared by both countries," the MEA said in a statement. TNA Won't Be Allowed to Achieve Through Vote What LTTE Failed to Do with Gun: PM Rajapaksa.

"PM Modi noted that the incoming results of the elections indicate an impressive electoral performance by the Sri Lanka Podujana Peramuna (SLPP) party, and conveyed his congratulations and best wishes to Mahinda Rajapaksa in this regard," the ministry added. The SLPP, headed by the Rajapaksa family, appeared to be heading for a landslide win in Sri Lanka parliamentary elections, according to early results announced on Thursday.

Mahina Rajapaksa, who is SLPP's prime ministerial candidate, thanked PM Modi for his congratulatory phone call, adding that India and Sri Lanka are "friends". "Thank you PM Modi for your congratulatory phone call. With strong support of people of Sri Lanka, I look forward to working with you closely to further enhance the long-standing cooperation between our two countries. Sri Lanka & India are friends (sic)," the Sri Lankan PM tweeted.

Replying to Mahina Rajapaksa's tweet, PM Modi said India and Sri Lanka will work together to take their relationship to new heights. The Indian Prime Minister tweeted: "Thank you, Prime Minister @PresRajapaksa! It was a pleasure to speak to you. Once again, many congratulations. We will work together to further advance all areas of bilateral cooperation and to take our special ties to ever newer heights (sic)."

Thank you, Prime Minister @PresRajapaksa! It was a pleasure to speak to you. Once again, many congratulations. We will work together to further advance all areas of bilateral cooperation and to take our special ties to ever newer heights. https://t.co/123ahoxlMo

The SLPP has polled more votes than its rivals, scoring over 60 percent of the total votes in the 16 seats declared so far from the South, dominated by the Sinhala majority community. The party won 13 seats out of 16. In Galle district, the SLPP won seven out of nine seats on offer while in the neighbouring Matara district they did even better by winning six out of seven seats on offer.

The nearest rival is the new party formed by former presidential candidate Sajith Premadasa who has relegated his mother party, the United National Party (UNP), of former premier Ranil Wickremesinghe to the fourth place even below the Marxist Janatha Vimukthi Peramuna (JVP). The SJB has won only three seats from both districts.

President Gotabaya Rajapaksa had dissolved Parliament in March, paving the way for the 16th general elections which were initially scheduled for April 25, but were postponed twice due to the ongoing COVID-19 pandemic. The President's Sri Lanka Podujana Peramuna party has to win majority (113 seats) in the house in order to secure the government's full control in the semi-presidential representative democracy. (With PTI inputs)

(The above story first appeared on LatestLY on Aug 06, 2020 09:37 PM IST. For more news and updates on politics, world, sports, entertainment and lifestyle, log on to our website latestly.com).