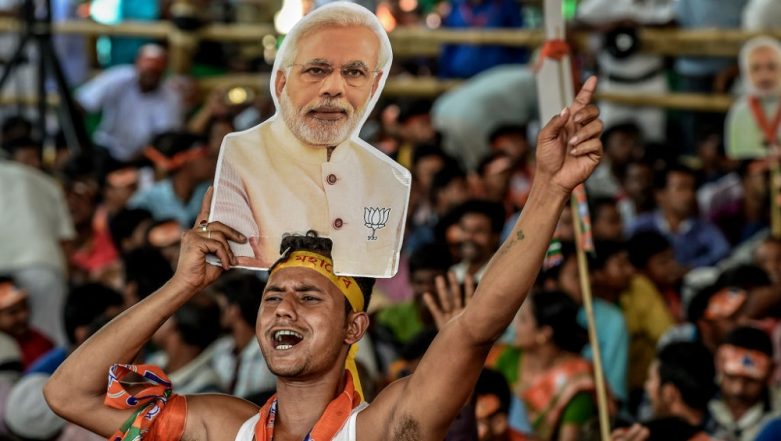 New Delhi, May 19: The BJP-led National Democratic Alliance (NDA) is expected to retain 22 Lok Sabha seats in Gujarat, the home state of Prime Minister Narendra Modi, a slight dip from its 2014 tally when it had swept the state, the IANS-CVOTER exit poll showed on Sunday. In the previous general election in 2014, the BJP-led NDA had won all 26 Lok Sabha seats in the state.

The exit poll comes after the seven-phase- 2019 general election ended on Sunday, with the final results slated to be announced on May 23. According to the exit poll, the NDA is predicted to win 22 seats out of 26 parliamentary constituencies of Gujarat. On the other hand, the United Progressive Alliance (UPA) is projected to win four seats in 2019. The UPA had not even won a single seat in 2014. Exit Poll Results of Lok Sabha 2019 for All Constituencies of Andhra Pradesh: YSRCP Set for a Landslide Win, Predicts Post Poll Surveys.

Additionally, the vote share projection shows the NDA having a greater share of 59.3 per cent, while the UPA stands at 37.4 per cent. In the previous general election, the NDA had augmented its tally from 2009, whereas the UPA lost all of its 11 seats. At present, the BJP runs the state government, whose mandate it won in 2017.