Lok Sabha Elections 2019: BJP vs Mamata Banerjee Contest Turns Ugly, A Lesson on How Not to Fight Polls 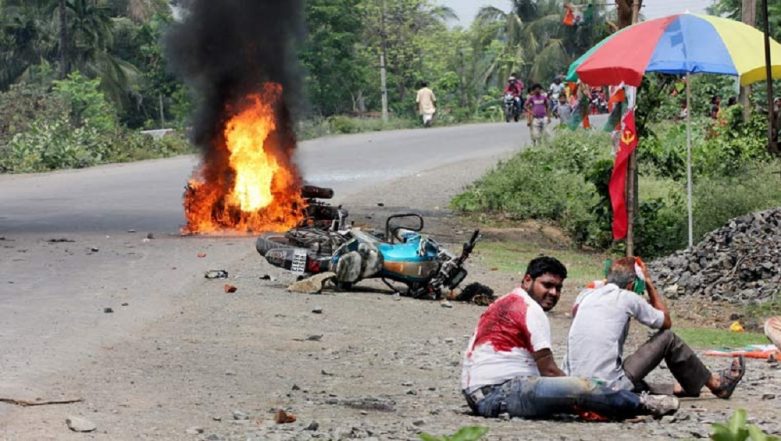 Kolkata, May 15: "Situation in West Bengal is similar to how it was in Bihar 10-15 years ago," said Election Commission's Special Observer in the state, Ajay V Nayak, last month. His remarks came amid the ongoing Lok Sabha elections 2019, which has featured Bengal as the hotbed of political violence and electoral malpractices. Amit Shah Blames TMC For Violence During Kolkata Roadshow, Says 'Managed to Escape Thanks to CRPF'

The poll battle continues to turn murkier between the Trinamool Congress (TMC) and an aggressive Bharatiya Janata Party (BJP) with each passing day.

Fatal attacks were reported even before the poll bugle was sounded. Institutional face-offs, intimidation of rivals, murders, communalism and personalised jibes further venomised the electoral contest as the two parties took their fight right till the polling booth.

The bitter BJP-TMC battle, deeply embroiled in violence, leaves behind a lesson on "how not to fight elections" in a democracy.

According to an estimate released by Union Home Minister Rajnath Singh, at least 100 political workers affiliated to the anti-TMC parties in Bengal were killed till between Panchayat elections last years to February 2019.

The Home Ministry's reprimand to the state government did not change the scenario, with scores of political killings being reported in the run-up to Lok Sabha polls, as well as after the elections begun.

Workers of Trinamool are also among the list of victims. Most recently, a TMC activist was found dead in Contai on May 11, a day before the sixth phase polls. On April 26, another TMC worker was hacked to death in Malda.

The fatal attack on Trinamool rivals outnumber the killing of state-ruling party members. On May 11, one BJP booth-level worker was hacked to death in Jhargram, whereas, two others were injured after being shot at in East Midnapore.

On May 6, CPI(M) worker Sheikh Kamrul was killed in East Burdwan, whereas, 5 others were left hospitalised.

In a robust democracy, a conducive atmosphere is essential for candidates to campaign without fear. In Bengal, however, several candidates in fray have been subjected to stone-pelting, heckling and attack on convoys.

Not only from the BJP, notables candidates from the Communist Party of India (Marxist) have also faced attacks from alleged Trinamool cadres. The list includes Mohammed Salim, the sitting MP and candidate from Raiganj, and Huad Alam, contesting against Mamata's nephew Abhishek Banerjee in Diamond Harbour constituency.

This is the bicentenary year of Ishwar Chandra Vidyasagar. This is how Bharatiya Janata Party (BJP) goons paid their tribute. #Shame. #Kolkata will give a fitting reply on May 19 pic.twitter.com/Bzh8fyXnNt

Reporters of several news channels and dailies were roughed up outside a polling booth in Barrackpore by alleged Trinamool members on May 6, when the fifth phase of elections were underway.

"Physical attacks against journalists are always reprehensible, but particularly so during elections as they undermine fair media scrutiny of an election," the Editors Guild said in a statement, demanding the Election Commission to create an atmosphere which allows journalists to effectively discharge their duty in a democracy.

The 25-year-old was on Saturday sent to 14-day custody by the Chief Judicial Magistrate's Court. However, the Supreme Court intervened in the matter after receiving an urgent plea. In a setback for the Bengal police, the top court granted her bail, asking the woman to apologise immediately after being released.

Though defamatory and derogatory jibes are prone to legal backlash, experts are of the view that the ruling regime should not crush dissent expressed through a caricature.

The government controlling a jurisdiction's police force and administration is liable to provide a level-playing field in wake of elections. Accusations have been levelled against the "Trinamool-controlled" administration of denying permits to leaders from the rival camp for electioneering.

A rally planned by BJP chief Amit Shah in Jadavpur was cancelled on May 14 following the denial of permission. The authorities had even disallowed him to land his chopper in the poll-bound region.

Similarly, a poll meeting scheduled to be addressed by BJP star campaigner and UP Chief Minister Yogi Adityanath was cancelled after the stage was vandalised and completely destroyed by "goons".

"When stage was being set up, labourers working on it were beaten up and scared away; the stage was vandalised. The public meeting was scheduled for 2 pm today (May 15), stage couldn't be repaired. So we had to cancel it," said BJP candidate Rahul Sinha.

Mamata Banerjee to be Blamed?

The CPI(M), which ruled Bengal for 35 years and is accused to have a fair share in the state's history of political violence, has echoed BJP in its tirade against Mamata Banerjee.

The party has accused the Trinamool regime of roping in mafias, criminals and antisocial elements to win the elections by driving fear and polarisation.

CPM general secretary has called the BJP and TMC "two sides of the same coin", claiming that the two parties share the same ideology of violence.

"BJP-TMC created chaos is hitting at the heart of Bengal and its core. They cannot be allowed to get away with this. They will not," he said.

Mamata has, however, dismissed the charges levelled against her. On the contrary, she has denied reports of mass-scale poll violence in the state.

"EC, not the TMC, is conducting this elections. There is no violence. There are so many blocks and booths, if BJP is going somewhere and doing it, then it’s them and no one else," she said, reiterating that questions should be raised at the Election Commission if irregularities are being noticed.

Amit Shah has countered her claims by asking why there is negligible amount of violence in other states where the BJP is among the prime contenders.

"I want to tell her, we are fighting in every state in the nation,unlike you on 42 seats in West Bengal. Violence didn't take place in 6 phases of elections anywhere but Bengal which proves that TMC is responsible for it," he said.