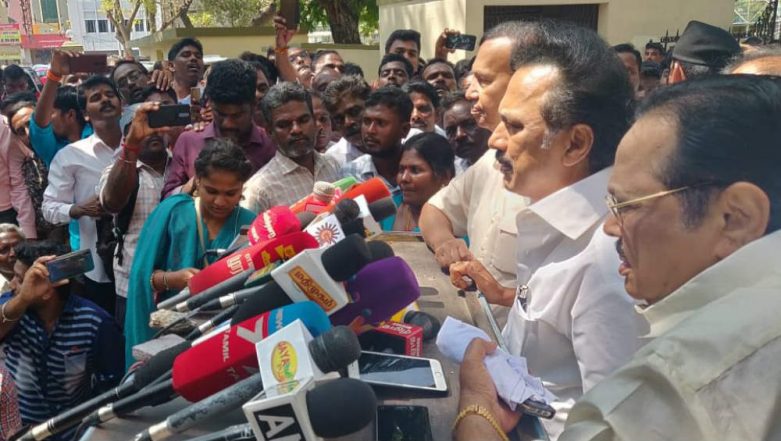 Chennai, March 15: The DMK-led Secular Front in Tamil Nadu on Friday demanded a High Court monitored CBI probe into the Pollachi serial sexual assault and blackmailing case. A resolution to this effect was adopted at a meeting of all the alliance partners headed by the DMK here. It said the High Court should devote special attention as it is done in idol theft cases and ensure that none of the accused were allowed to go scot free. Alleging that those belonging to the ruling AIADMK were involved in the crime, the resolution claimed that efforts were being made to hide the truth.

"The way Goondas Act was slapped on the four arrested accused, ordering of a CB-CID probe and then issuing a (order) transferring the case to CBI and subsequent steps only showed that efforts are being made to protect the accused," it alleged. "If justice has to prevail, a High Court monitored probe by the CBI is a must to ensure that all those involved are given stringent punishment," it said. Pollachi Sexual Abuse Case: Booked MK Stalin’s Son-in-Law Sabareesan Shoots Legal Notice, Demands Unconditional Apology.

Alleging that the crime had been on for the last seven years, the resolution also condemned the state government for releasing the name of the victim who had lodged a complaint and said it would prevent other victims from coming forward to lodge their complaints. "Full justice will be ensured only if all those involved in this heinous crime are arrested and investigated," it said.

The Tamil Nadu government on Thursday issued an order transferring the probe in the case involving sexual assault and blackmailing of several women in Pollachi by a group of people to the CBI. The order, transferring the case to the CBI, was issued two days after Director General of Police (DGP) T.K. Rajendran ordered a CB-CID probe after the incident created a furore.

The four accused, including mastermind Thirunavukarasu, were detained under the Goondas Act following a direction from Coimbatore District Collector K. Rajamani on recommendations from Coimbatore Rural Superintendent R. Pandiarajan. The four, Thirunavukkarasu, Sathish, Sabarirajan, Vasanthakumar, all in their 20s, were accused of sexually assaulting many young women in Pollachi over a period of time and filming the act. The mobile phones seized from the accused had videos of at least 40 women who the accused had allegedly blackmailed for money and sexual favours.

The Thursday order said that DGP Rajendran, on a complaint from a college student on February 24 that she was physically and sexually harassed by a group of men inside a car, cases were registered at Pollachi East Police Station under Sec 354-A, 354-B and 392 of IPC (Central Act XLV of 1860) and Sec 66-E of IT Act, 2000 and Sec 4 of Tamil Nadu Prohibition of Harassment of Women Act, 1998 (Tamil Nadu Act 44 of 1998) against the four accused who were later arrested and sent to judicial custody.