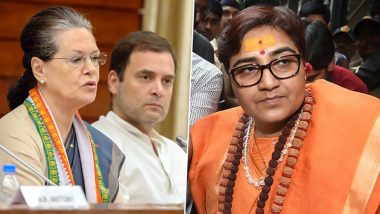 "Chanakya had said only a son of the soil can protect the country. A person born to a foreign woman cannot be a patriot," Thakur, an accused in the 2008 Malegaon blast case, said without naming Sonia and Rahul. "If you have citizenship of two countries, how can you have any patriotic feelings," the self-proclaimed Sadhvi added. Thakur further said the Congress party is devoid of moral, ethics and patriotism.

"Congress should look within. They don't know how to speak. The party is devoid of ethics, morale, and patriotism," she said. Congress's spokesperson in Madhya Pradesh, JP Dhanopia, reacted sharply to Thakur's statement. "Pragya has brought disgrace to the post of MP. She was also involved in a case of terrorism. Now she seems to have lost her mental cool. BJP should get her treated," Dhanopia was quoted by NDTV as saying.

Congress legislators also hit back at Thakur. Congress MLA Jitu Patwari said those who worship Nathuram Godse can't be a patriot. Another Congress legislator PC Sharma called Thakur an absconder who has gone missing from her parliamentary constituency.

(The above story first appeared on LatestLY on Jun 29, 2020 02:15 PM IST. For more news and updates on politics, world, sports, entertainment and lifestyle, log on to our website latestly.com).