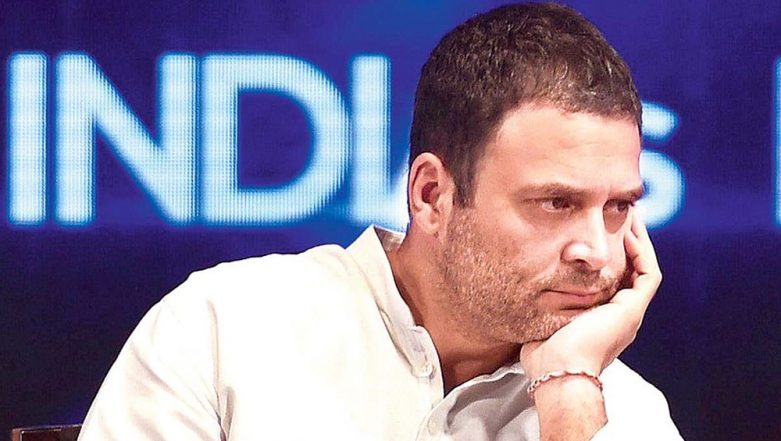 Amid rumblings within the party after a disastrous performance in the Lok Sabha polls, Congress chief Rahul Gandhi is said to have accused three senior leaders of placing their respective sons above the party while his sister Priyanka Gandhi Vadra has alleged the entire top-brass left him alone to fight it out against Prime Minister Narendra Modi, party sources said. Rahul Gandhi's Personality Does Not Attract People: Shiv Sena.

Narrating inside details of the crucial Congress Working Committee (CWC) meeting, which was held on Saturday to assess the party’s poll rout, the party leaders said Rahul Gandhi did a lot of ‘plain-speaking’ in his surgical analysis of the role of several party leaders while himself offering to quit as the party president. He also said he does not want any other member of the Gandhi family to succeed him, virtually ruling out Priyanka as well for the top party position.

Party sources said the top leadership is working out possible strategies for its future course of action, even as there are rumblings within the Congress over the turn of events at the CWC meeting. The meeting was held in the backdrop of the Congress winning just 52 Lok Sabha seats and drawing a nought in 18 states and Union Territories. Gandhi himself lost from the family bastion of Amethi in Uttar Pradesh, though he won from Wayanad in Kerala.

Stating that Priyanka lost her cool more than once during the four-hour long CWC deliberations, a party leader present there said the AICC General Secretary in charge of Eastern Uttar Pradesh said, “All those responsible for the party’s defeat are sitting in this room”.

When some party leaders were trying to convince Rahul Gandhi to take back his resignation, which he had offered taking moral responsibility for the Congress debacle, Priyanka is learnt to have intervened saying, “Where were you when my brother was fighting all by himself and alone?” Priyanka sat through the meeting, looking visible anguished, and interjected twice at least, while saying on one occasion, “No one supported Congress President in taking forward the narrative of Rafale and ‘chowkidar chor hai’.” Rahul Gandhi, who left the meeting abruptly and was adamant there on not continuing as the Congress president, also ticked off three senior party leaders -- former union minister P Chidambaram, Madhya Pradesh Chief Minister Kamal Nath and Rajasthan CM Ashok Gehlot -- saying they placed their sons before party interests.

Chidambaram’s son Karti and Nath’s son Nakul managed to win the Lok Sabha elections from their respective seats, but Gehlot’s son Vaibhav lost. CWC sources said that when former Guna MP Jyotiraditya Scindia urged Gandhi to strengthen the state leaderships of the party, the party president quipped looking at Chidambaram, saying that “Mr Chidambaram threatened to resign if a ticket was denied to his son.” About Kamal Nath who was absent from the CWC meeting, Gandhi said, “Mr Nath said how could he be CM if his son was not fielded.” Taunting Gehlot the Congress Chief said the Rajasthan CM spent seven days campaigning for his son in Jodhpur neglecting the rest of the state.

Gandhi is learnt to have voiced his disappointment at the state of affairs in the party when he said to the CWC why can’t anyone else be Congress Chief. Sources said Priyanka also urged her brother not to resign saying it would be like “falling into BJP’s trap”. Rahul Gandhi Likely to Resign From Congress President Post Today After Humiliating Defeat in Lok Sabha Elections 2019.

Rahul Gandhi also expressed his displeasure at not being supported in the Rafale campaign and is said to have asked the party leaders present in the meeting how many of them backed him in building the corruption narrative against Prime Minister Modi. When some leaders raised their hands to say that they spoke about Rafale, Gandhi is said to have dismissed them.