After Yashwant Sinha another heavyweight national leader, Shatrughan Sinha, seems likely to cross over to the Trinamool Congress from the Congress soon. 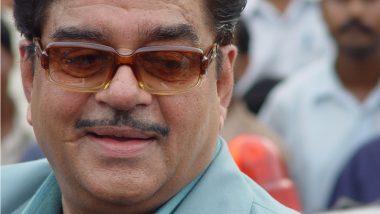 Kolkata, July 16: After Yashwant Sinha another heavyweight national leader, Shatrughan Sinha, seems likely to cross over to the Trinamool Congress from the Congress soon.

Senior Trinamool leaders claim that talks with Sinha are at the final stage and if everything goes according to expectation then he might join hands with Mamata Banerjee on July 21.  Sharad Pawar, Yashwant Sinha Host High Level Opposition Meet

Though in a recent tweet Sinha popularly indicated a 'Ghar Wapsi' to the BJP but insiders in Trinamool Congress claim that after the West Bengal assembly elections where Chief Minister Mamata Banerjee single-handedly destroyed the heavyweight saffron brigade, the 'Bihari Babu' is more inclined towards the Trinamool Congress.

Sinha, who had walked out of the BJP after launching a tirade against Prime Minister Narendra Modi and Union Home Minister Amit Shah, saying the saffron party has become "one man party and two men army", had recently posted a tweet saying apart from three variants of COVID-19, there is a fourth variant of people being "dukhi" (unhappy) with Modi without any reason.

This was seen in the political circles as his efforts to reach out to his parent party aimed at homecoming efforts.

There was a turn of events after the assembly election in West Bengal when the former colleague of Yashwant Sinha, who is now the vice-president of Trinamool, showered lavish praise on Mamata Banerjee, calling her "real Royal Bengal tiger" and a "tried and tested leader who trounced propaganda and 'dhanshakti' (money power) in the just-concluded Bengal polls".

When asked in an interview about his possibility of joining Trinamool Congress, the Bollywood hero of yesteryears didn't waive the possibility but said - 'Politics is an art of possibility'.

Presently there are two seats in Rajya Sabha that are lying vacant after former union minister Dinesh Trivedi quit and joined the BJP before the Bengal polls and Trinamool Congress MP Manas Bhuniaya contested the just-concluded state polls and made a minister in Banerjee's third successive government.

Indications are that Shatrughan Sinha might be sent to the Upper House of Parliament from one of the two seats of the TMC.

(The above story first appeared on LatestLY on Jul 16, 2021 12:27 PM IST. For more news and updates on politics, world, sports, entertainment and lifestyle, log on to our website latestly.com).