The Indian Institute of Technology (IIT) Kanpur has submitted a report to the state government on the oxygen wastage in hospitals across Uttar Pradesh during the month of May. 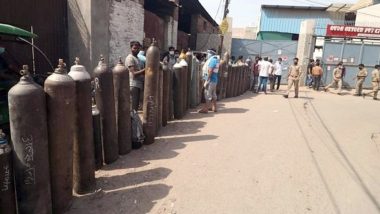 Kanpur, June 23: The Indian Institute of Technology (IIT) Kanpur has submitted a report to the state government on the oxygen wastage in hospitals across Uttar Pradesh during the month of May.

The report claims that of the 52 hospitals from various districts, 10 were found to be wasting oxygen or using more than the required amount per patient.  India News | TN's Taxi Ambulance, Rajasthan's Mobile OPD, Oxygen Nurses of Kerala, Among India's Best COVID Practices

According to the team, the list of hospitals was provided by the government with most of them being state-run hospitals.

The team collected information on the different kinds of instruments the hospitals used for supply of oxygen, amount of oxygen used and the number of patients using the oxygen.

This was compared to the standard usage to find where the consumption was excessive.

Professor Manindra Agrawal, deputy director of IIT Kanpur who was heading the study, said, "There are different kinds of equipment for oxygen supply - various kinds of masks and ventilators. All of these have standard consumption rates. We compared these standards with the average daily consumption in these hospitals and found that 10 hospitals had been using excessive amounts. We have submitted the findings to the state to take further corrective steps."

He added that maximum wastage was found while using the High Flow Nasal Cannula (HFNC).

"The study did not mention reasons for the wastage and it needs to be investigated further. However, the wastage could be because of leakage if the mask is not adjusted properly and has been left unmonitored," said Agrawal.

(The above story first appeared on LatestLY on Jun 23, 2021 02:29 PM IST. For more news and updates on politics, world, sports, entertainment and lifestyle, log on to our website latestly.com).