In a bizarre incident, a bride here called off her wedding merely because the groom could not read the newspaper without glasses. 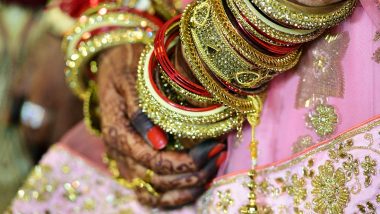 Aurraiya, June 24: In a bizarre incident, a bride here called off her wedding merely because the groom could not read the newspaper without glasses.

According to reports, one Arjun Singh had fixed his daughter Archana's marriage with a man named Shivam.  Uttar Pradesh: Bride Calls Off Wedding in Pratapgarh After 'Drunk' Groom And 'Baraatis' Misbehave With Her

The groom's family stated that he was a 'well-educated' man and the marriage was fixed.

When the groom arrived with the 'baraat' for the wedding on June 20, he was wearing spectacles.

Arjun Singh told reporters, "When the baraat came to the house on June 20, the groom was wearing spectacles all the time. We asked him to take off his spectacles and read a Hindi newspaper but he could not. My daughter refused to marry him."

The bride's family then filed a complaint at the nearby police station. They have demanded that the groom's family return all the dowry that was given to them, including cash and a motorcycle.

Shivam's family has not yet returned the dowry, therefore, an FIR has been lodged against them.

(The above story first appeared on LatestLY on Jun 24, 2021 04:07 PM IST. For more news and updates on politics, world, sports, entertainment and lifestyle, log on to our website latestly.com).