Year Ender 2020: From Arrival of Rafale Jets to MH-60 Romeo Helicopters Deal With US, Major Developments For Indian Defence Sector This Year

The year 2020 witnessed border tensions between India and China in the Ladakh sector along the Line of Actual (LAC). The border dispute further aggravated after the violent clashes between Indian Army troops and Chinese soldiers in Galwan Valley in Ladakh sector. Much awaited Rafale jets also arrived in India this year. 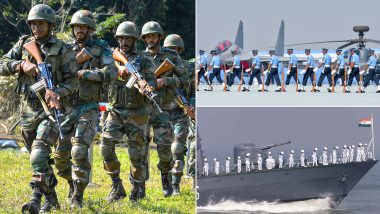 The year 2020 witnessed border tensions between India and China in the Ladakh sector along the Line of Actual (LAC). The border dispute further aggravated after the violent clashes between Indian Army troops and Chinese soldiers in Galwan Valley in Ladakh sector. It was the first time since 1975, that soldiers from both sides were killed in action along the Indo-Sino border. India-China Border Stand-Off: Chinese Troops' Attempts to Unilaterally Alter Status Quo in Violation of Bilateral Agreements, Defence Minister Rajnath Singh Tells Beijing.

However, in 2020, India also boosted its arsenal. The first batch of Rafale jets arrived in the country in July. The development came amid deteriorating ties with China. In the Budget 2020-21, Finance Minister Nirmala Sitharaman earmarked Rs 4,71,378 crore for the Ministry of Defence (MoD). Notably, India is one of the world's largest importer of Defence equipment. INS Himgiri, Project 17A Stealth Frigate, Launched at GRSE Yard in Kolkata; Know All About Indigenous Warship.

Here Are Four Major Developments in the Indian Defence Sector:

Arrival of Rafale Fighter Jets in India: The first batch of five Rafale jets arrived in India on July 29, while the second batch of three jets landed in the country on November 4. These Rafale jests were inducted into Golden Arrows squadron of the Indian Air Force (IAF) based at Ambala. Some of these jets were even deployed at Ladakh along the China border.

India’s Deal With US to Procure MH-60 Romeo Helicopters: India has placed orders for 24 MH-60 Romeo multi-role helicopters with the US under the government to government deal. Lockheed Martin released the first picture of the helicopter on the 49th Indian Navy Day. The contract was finalised in February 2020, during the visit of the United States President Donald Trump’s visit to India. In May this year, Sikorsky, a Lockheed Martin Company, signed a contract with the US Navy (USN) to provide 24 MH-60 Romeo helicopters to the Indian Navy.

Induction of Indigenous-built Naval Ships: INS Kavaratti was inducted into the Indian Navy at the Naval Dockyard in Visakhapatnam on October 22. INS Kavaratti is last of the 4 indigenously built Anti-Submarine Warfare stealth corvette. Project 17 A Frigate “INS Himgiri” was launched at the GRSE Yard in Kolkata in a glittering event on December 14.

Approval For Procurement of Sig Sauer Assault Rifles: The Union Defence Ministry in September this year approved a proposal to purchase 72,000 Sig Sauer assault rifles from the US at the cost of around Rs 780 crore. The decision was taken to equip the frontline troops of the Indian Army.

The Indian defence forces are moving forward towards the integration of all three wings of services. Integrated theatre commands will be formed to bring synchronisation in defence operations. In October this year, Indian Army chief, General Manoj Mukund Naravane said that the logical step in the process of defence reforms in India is the formation of Integrated Theatre Commands to synergise the capabilities and combat potential of the three armed services during war and peace.

(The above story first appeared on LatestLY on Dec 21, 2020 03:14 PM IST. For more news and updates on politics, world, sports, entertainment and lifestyle, log on to our website latestly.com).