Surrogacy Regulation Bill 2016: What is Surrogacy? A Guide To Understanding The Surrogate Birth Procedure

Union Health Minister J.P. Nadda also mentioned while introducing the bill that people who want to opt for surrogacy will have to submit their certificate of infertility with 90 days. 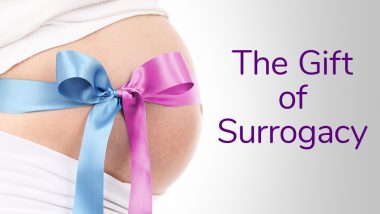 Everything you want to know about surrogacy. (Photo Credit: File Photo)

The Surrogacy (Regulation) Bill, 2016 was passed in the Lok Sabha yesterday 19th of December. The bill is said to help prevent commercialisation of the procedure of surrogacy. Surrogacy Bill aims to curb exploitation of vulnerable women and make the process of surrogacy free of any loopholes. However, the process of surrogacy is one misunderstood subjects especially in countries like India. Using a surrogate mother being a new concept even now, needs more clarity and awareness to different aspects of it like who can become a surrogate mother, how to find a surrogate mother, legal processes behind it and who can opt for surrogacy as a process to become parents. Here's everything you would want to know about surrogacy. Lesbian Couple ‘Give Birth’ To The Same Baby! US Women Take Turns To Carry The Child In Their Wombs.

Surrogacy is a process of helping couples who are unable to bear a child in any way to have a baby via a different mother. Surrogate mothers help couples from diverse backgrounds to help them have a baby. The process involves. In an arrangement that is usually supported by a legal agreement, a surrogate mother may agree to carry the pregnancy and give birth to a child or children for another person or persons who are unable to have a baby for any legit reason. The parents who opt for a surrogate mother for help will ultimately become the real parents of the newborn child or children.

Gestational surrogacy- In the case of gestational surrogacy the egg from the intended mother or an anonymous donor is removed and is fertilised with the sperm of the intended father or anonymous donor in many cases after which the fertilised egg is then transferred to a surrogate who then carries the baby. This causes the child to be genetically related to the woman who donated the egg and the intended father or sperm donor and not the surrogate. Various Lesbian couples are really fond of this process. Surrogacy Bill Passed in Lok Sabha During Winter Session of Parliament; Commercial Surrogacy to be Banned.

Who is Eligible to Become a Surrogate Mother?

Who Can Opt for Surrogacy to Become Parents?

People who unable to become parents by any means can opt for surrogacy. According to the new rule in India, a couple opting for surrogacy will have to provide a certificate of infertility within 90 days. Here are the couples who can choose for a surrogate mother-

Where Can you Find a Surrogate Mother?

In India, according to the latest Surrogacy (Regulation), Bill 2016 Passed yesterday the surrogate mother should be a close relative of the couple. However, the definition of "close relative" isn't specified. The bill only allows altruistic surrogacy which prevents commercialisation of surrogacy. Moreover, the Union Health Minister J.P. Nadda also mentioned while introducing the bill that people who want to opt for surrogacy will have to submit their certificate of infertility with 90 days.

If you are facing issues related to pregnancy, you may want to give surrogacy a try. Surrogacy has helped a lot of distressed couples and even celebrities have opted for the procedure.

(The above story first appeared on LatestLY on Dec 20, 2018 12:55 PM IST. For more news and updates on politics, world, sports, entertainment and lifestyle, log on to our website latestly.com).