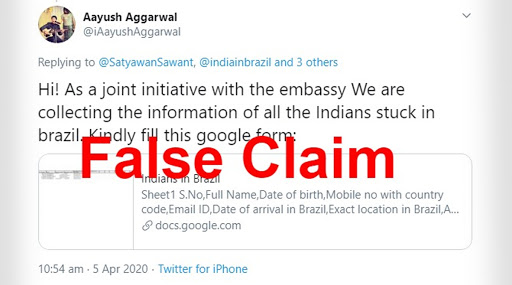 New Delhi, April 6: Along with the coronavirus, numerous rumours are making the rounds on social media. Among the several ones, a rumour did make headlines when a social media user claimed that Indian Embassy in Brazil is collaborating with private individuals to collect the information of all the Indians stuck in Brazil along with the Consulate General of India in Sao Paulo. For this, the social media user even released a google document.

According to the google document, a person will have to fill his or her full name, date of birth, mobile number with country code, email id, date of arrival in Brazil, exact locations and other vital details. However, the Ministry of External Affarirs has quashed the rumours and collaboration between Indian Embassy in Brazil and a private partner organisation, along with Consulate General of India in Sao Paulo. Viral Video Claiming Brazilians Responded to PM Narendra Modi's Call to Light Diyas or Mobile Torchlight to Mark Fight Against Coronavirus is Old.

1. This is a false claim. There is no such joint initiative, with private individuals, of the @indiainbrazil and @cgisaopaulo to collect information of Indian nationals. pic.twitter.com/X6upTgFbct

The Ministry of External Affairs has instead asked the people to directly contact MEA and not share their personally identifiable information with non-Government entities. Adding more, MEA said that Indian Embassy in Brazil and Consulate General of India in Sao Paulo are directly in touch with the Indian nationals in Brazil and would request any information, if needed, to be done directly.

The MEA has also asked Aayush Aggarwal -- who spread the rumour -- not to circulate such posts which may create a panic situation and undermine the efforts of MEA India. Hence, the claim made by social media user is fake and false.

The MEA has quashed the rumours and has instead asked the people to directly contact MEA and not share their personally identifiable information with non-Government entities.